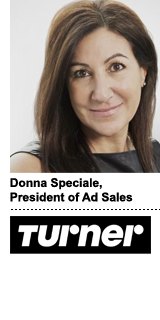 Unlike in digital, where marketers can buy across multiple publishers, TV planning is largely limited to a single broadcaster’s inventory.

Fox, Turner and Viacom have jointly formed an advanced audience platform called OpenAP, which will roll out to media agencies and advertisers in early April, to try to solve that challenge.

While each network has its own data and audience-indexing platform, buyers wanted better interoperability between these walled gardens. And the three networks involved know there’s strength in numbers.

“We are standing up a platform where any client can come in and standardize their segments once across all three networks,” said Donna Speciale, president of Turner Ad Sales.

OpenAP is not one big data store where networks can see another’s activations.

“We will all still negotiate and transact directly with clients just how we do today, but once we create our proposals, we’ll be able to standardize that posting [across networks] and enable [an audience] comparison with third-party auditing, which can’t be done today,” Speciale added.

While Fox, Turner and Viacom were already matching data against panels to find audiences, historically, clients would have to go through that process with each network, said Joe Marchese, president of advanced advertising products for Fox Networks.

Each network is still in charge of its own pricing, planning and activation, but OpenAP will help standardize audience segments so a buyer can measure with more precision – how many impressions they delivered across Fox, CNN and MTV, for example.

OpenAP is designed to allow other TV broadcasters with premium audiences and content to join, said Sean Moran, head of sales for Viacom.

“We all feel confident about the audiences we bring, but we think this moves closer toward true attribution and really defining specific audiences that goes way beyond demography, which seems to be a 50-year-old idea,” Moran said.

The cross-network consortium will also allow its founding members to present a unified “pitch” around democratized audience targeting this television upfront.

Ratings are either flat or falling, while major network competitor NBC just revealed an aggressive plan to package $1 billion worth of media on data guarantees.

“We think this is a step in the right direction to optimize linear based on audience-based buying,” Marchese said. “That will help reduce waste and, ultimately, reduce the ad load, ideally, which is a win-win for the consumer. Making ads more relevant for the user is something we’ve been very vocal about at Fox.”