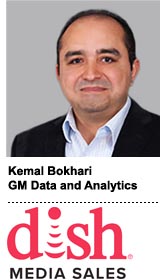 These capabilities are available due to an expanded partnership between Dish’s media sales team and Nielsen, which the companies unveiled Thursday.

The audience segments come from Nielsen Buyer Insights and Nielsen Catalina Solutions (NCS). The former has data from in-store purchases and online credit and debit card purchases, while the latter has data from CPG loyalty programs.

“The Nielsen Buyer Insights and NCS segments were available on the Dish platform from a few years ago, but as the demand for cross-platform has increased earlier this year, we’ve included Sling TV to be part of that,” said Kemal Bokhari, GM of data and analytics in Dish’s media sales team.

For example, an advertiser like P&G can use NCS to find households that buy Bounty paper towels and send them messages via Sling TV on mobile and desktop.

“We’ve had a lot of demand for this,” Bokhari said. “We’re in this new world where cross-platform is the hot item.”

Nielsen is the latest cross-screen audience provider on Sling TV. Dish has existing relationships with Experian Marketing Services, Acxiom, Neustar and Polk, many of whom can already be activated across screens on Sling TV.

Advertisers can also apply their first-party data to their addressable ad buys – but Dish doesn’t handle that directly, since the data is so sensitive. Instead, advertisers must work through a safe haven provided by a company like Experian, Acxiom or Neustar.

Addressability in TV is gaining traction among advertisers, and both Dish and Sling TV are seeing the benefits. While Bokhari declined to say how many addressable campaigns run through Dish and Sling TV, he indicated that the year-over-year growth rate resembles a hockey stick.

As with many satellite and OTT content providers, Dish can sell two minutes of ad inventory per hour of programming.

Slinging around some proof of delivery

Previously, Dish would simply validate ad delivery for regular campaigns using its own reporting. For addressable campaigns, it would use other third-party measurement companies.

This partnership between Dish and Nielsen expands on a previous one, where Dish had used Nielsen TV Ratings Service and Nielsen Digital in TV Ratings to ensure proper ratings for each show.

The Nielsen-Dish partnership comes during a troubled time for Nielsen, with activist hedge fund investor Elliott Management pushing for a sale.

But Bokhari notes that advertisers still demand the Nielsen measurement currency. If or when a shake-up does happen, Dish will evaluate the partnership.