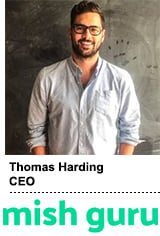 Building Stories on Instagram and Snapchat is a Sisyphean effort for many marketers. After 24 hours, it all disappears.

Brooklyn-based software company Mish Guru is trying to alleviate some of brands’ well-documented pain points with Stories. Its new Instagram Story Builder, which launched in November, helps gather user-generated content (UGC) tagged to a brand. It also allows advertisers to track engagement and traffic on Stories.

McDonald’s, Coca-Cola and PlayStation have all used Mish Guru’s other social tool, the Snapchat Story Builder, to incorporate UGC into their Stories strategies.

User-generated content is very different from the highly polished videos abundant in Instagram or Facebook feeds, and for some advertisers, it might seem riskier or more challenging. But Mish Guru’s research found that UGC performs seven times better on Stories than highly produced videos.

AdExchanger caught up with Mish Guru co-founder and CEO Thomas Harding to learn more about what brands can do to make their Stories work for them.

AdExchanger: Why is it so hard for brands to build Stories on Instagram and Snapchat?


THOMAS HARDING: First and foremost, it’s a new format. If you look at where we’ve come from, we used to have the news feed, where you had a single post and people liked and shared and commented.

So Stories is a totally new format that’s mobile-first, full screen and fully immersive. I think people are just trying to get their heads around that change.

Stories disappear after 24 hours. How does that complicate social strategy?

Yeah, Stories are so content-hungry. What I mean by that is you could build something and then in 24 hours it’s all gone. As a brand or as a publisher media company, you need to be constantly sourcing content, and it can be quite a challenge if you don’t have enough dedicated resources for it.

Is it hard for brands to gauge the effectiveness of Stories on Instagram or Snapchat?

It’s really hard to report against what you’re doing as a brand right now [on Stories.] You can’t really get good insight into what’s working and what’s not.

We’re of the opinion that the more data people have about what was previously done, the better off you’re going to be in the future to help inform their strategies.

What is Mish Guru doing to try and solve for this?

We make it really easy to tap into a range of sources in order to populate Stories. We make it super easy to work with influencers, for example. If you’re a video company, we can help you tap into the Stories that your team is creating on their personal accounts. Our platform makes it really easy to ingest all of that content.

How does that work, given the abundance of video people create every day?

Our platform makes it really easy to tap into a range of sources in order to populate a brand’s Stories. We make it super easy to work with influencers, for example. People are either streaming in video or tagging the brand on Snapchat and Instagram, and from our end, we’re seeing that kind of user-generated content actually performing significantly better in terms of engagement.

This is really killing two birds with one stone because it helps drop the cost of creating stories and the content itself performs better.

According to our database, we’re seeing about 35% higher completion rates on user-generated content. The main thing is that people want to see authentic video rather than overly polished stuff, and using your audience is actually a really quick and easy way to achieve that.

The thing is, all this content is going to disappear after 24 hours. I think the expectation is to see video that looks a little more rough and ready because of that. People want to see something that looks like it was created for the platform rather than for the news feed.

Can you give me an example of what this looks like with a client you’ve worked with?

McDonald’s had a fun campaign they ran recruiting people to work in their stores. They realized that their target demo is within the 13- to 24-year-old range, and the platforms they’re using most are Snapchat and Instagram. They put out a really fun campaign using a Snapchat lens, which basically put the McDonald’s uniform on you. They called it “Snapplications,” so you could send in your job application.

McDonald’s used our platform to gather all the user-generated content created around the campaign. Then we moderated a bunch of the videos and republished all of the fun ones. People saw themselves popping up on the McDonald’s Story, and it avalanched into a really big campaign for them and ultimately, I think, they won three or four awards for it.

How did your platform help measure the success of the campaign?

There was a call to action posted [on the Stories] like, “Go visit this page,” and using our platform, you could actually do the swipe-up link. We could then track the data to see how many people were swiping up on [the McDonald’s] content.

I know [McDonald’s] had within the first day a couple thousand people who participated in the campaign and sent in applications, and they far exceeded what their goals were for recruitment as well.