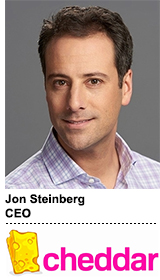 Altice USA said Tuesday it will buy the digital news company Cheddar for $200 million. The deal is subject to regulatory approval before it closes.

Founded in 2016 by former BuzzFeed exec Jon Steinberg, Cheddar broadcasts live news 19 hours a day through its two networks, Cheddar Business and Cheddar News. Since then, Cheddar has raised $54 million, with Altice as an early investor, along with Comcast and Amazon.

Altice USA was formed when the Dutch telco Altice bought Cablevision in 2015 for $17.7 billion. It now services the tri-state area in the United States and parts of the Midwest and South – and that scale is one of the reasons Cheddar agreed to be acquired, said Steinberg.

“They’re the third largest cable company in the US, and focused on live news,” he said.

In buying Cheddar, Altice USA inherits a news team that caters to millennials.

It also increases its reach into new distribution channels. Cheddar’s programming is available through its own app, and it streams on OTT services, such as Hulu, YouTube TV, Sling TV, Twitch and Amazon Prime, and social media platforms Snapchat, Facebook TV and Twitter. These partnerships make Cheddar available in 40 million pay-TV households.

Besides content, Cheddar began positioning itself as a utility for young people when it purchased Rate My Professors from Viacom last October.

Being acquired by Altice USA also gives Cheddar the opportunity to enhance its own advertising capabilities. The digital network hasn’t traditionally seen the bulk of its revenue from selling ads. Instead, it licenses its unique content to other platforms for a fee and takes a share of advertising.

But lately, Cheddar has beefed up its own ad products. While it’s focused mostly on sponsorships, it selected MightyHive in January to handle its programmatic placements.

“You think of us in terms of sponsorships, and I want to bring more scale, linear television spots, and programmatic inventory to that,” Steinberg said.

In joining Altice USA, Cheddar has access to the a4 platform, an advanced TV business that formally launched in April 2018 to enable cross-screen targeting across 90 million US households and a billion devices.

“We can go to clients and say we can do these custom creative sponsorships, and a massive scaled buy,” Steinberg said – noting that’s a capability Cheddar can provide currently, even though the acquisition hasn’t closed.

“We can run the spots right away and take cut-downs, whether it’s display or video units, and run it through a4,” he said.

Moreover, Cheddar’s roots in streaming on social and smart-TV apps gives it a higher ratio of addressable audiences compared to other networks or content studios.

Altice USA’s acquisition comes at a time when broadcasters are jockeying for content – and the right to sell ads alongside that content. Disney is giving up millions of dollars in licensing fees to make its content exclusive. Meanwhile, AT&T’s ad unit, Xandr, and the Comcast-Cox-Charter sales consortium, NCC Media, are trying to aggregate the rights to sell as much inventory as possible. (Xandr has a deal with Altice USA to sell its addressable TV inventory.)

Regardless of the competition’s activities, Steinberg has big plans for Cheddar.

“I want to be the leading live news player in international, national, business and local, for both traditional and paid TV customers, and for people that don’t have a traditional cable bundle,” he said.