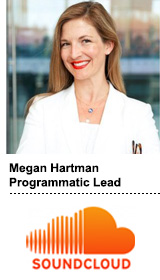 It’s been a tough year for SoundCloud.

In July, the music streaming and discovery platform cut 40% of its workforce, or 173 employees, to keep the company afloat – for just another quarter. The company has long faced battles with music rights holders, an expensive problem that makes the streaming business tough to monetize.

SoundCloud, on the brink of collapse, received a lifesaving $170 million Series F funding round on Friday led by Raine Group and Temasek Holdings. As per deal terms, CEO and co-founder Alexander Ljung became chairman while Vimeo CEO Kerry Trainor took over the CEO role. Once valued at $700 million, SoundCloud is now valued at $150 million.

Behind the scenes of turmoil, however, SoundCloud has been doubling down on its programmatic offering. The platform launched its ad-supported business four years ago and its programmatic capabilities on Rubicon internationally in March.

SoundCloud also launched a subscription service, SoundCloud Go, in March to compete more directly with services like Spotify and Pandora, but hasn’t reported metrics around its user growth.

“This has been a year for a wave of ad product launches,” said Megan Hartman, programmatic lead at SoundCloud.

Buyers can access SoundCloud audio, pre-roll and in-feed video inventory via Rubicon’s exchange to reach its 175 million listeners globally (although some analysts think that number has sunk to 70 million). The platform will launch on AdX later this year. Beyond that, Hartman declined to comment on SoundCloud’s future programmatic road map.

AdExchanger: How much emphasis are you putting on a programmatic as a revenue driver versus SoundCloud Go?

MEGAN HARTMAN: Advertising is fairly new to SoundCloud, and programmatic is very new. Programmatic is part of the greater brand partnerships team. The international strategy was centered around audio, which makes up the vast majority of our inventory.

Ad revenue is one of our pillar revenue streams. SoundCloud Go is definitely an initiative for us to drive more usership and retain our audience as well.

How will you funnel your latest funding round back into your ad-supported business?

I can’t speak to the road map, but I can say that we have a lot of expansion ahead and we’re really looking forward to it.

How does your programmatic offer compete with more established players like Spotify?

We’re still growing from an operations and process perspective. Because it’s so new and we are in growth mode, I’m not sure how we compare in terms of headcount, but we work closely with each other and have a lot to learn from each other.

Programmatic audio is relatively new. How much demand is there from marketers?

We’ve seen [demand from] all verticals, but the most popular today are entertainment, auto and CPG. We’re getting more into financial.

There’s a lot of hand-holding. Programmatic audio is new for all sides of the market. We’re figuring out what KPIs are important. We’re setting the standard and shaping the development of the tools.

What KPIs do brands care about when buying programmatic audio?

KPIs vary with each marketer, but one universal KPI I’ve seen is completion rates. It’s similar to video, but there’s limited standardization for audio today. We’re working with groups like the MRC and IAB to set them across the board.

What standards still need to be set?

Reporting, measurement, creative guidelines, how to measure fraud and what KPIs really matter for audio. Is it listen-through? Will we be able to measure audibility? How do we measure attribution across channels and formats?

Once there are standards to align the publisher and advertiser perspectives, it will allow audio to grow at scale.

Is there enough quality supply in programmatic audio to scale?

I’ve seen material growth to elevate the targeting and formats required for audio, but there’s still lot of growth to be done and I think that will come as a result of standardization. There’s a finite amount of premium audio supply and demand, but I do see it coming.

How do you leverage your data for buys on your platform?

We have registration data, basic demographics, device IDs and Wi-Fi, but what’s super compelling is the content that our listeners are consuming.

It’s an opportunity for marketers to reach listeners [based on] insights into their moods. We have emotional queues, whether it’s playlists or genres. [Marketers can] target whatever data sets they’re working with through us on their demand-side platform.

What’s changing the most in programmatic that you’re trying to wrap your head around?

Audio, without a doubt. It’s come to the forefront of a lot of marketers’ strategies.

Users are discovering products and promos through audio 60% of the time versus 40% in display. Engagement rates with podcasts and streaming are on a continued upward trajectory.

Audio is an important touchpoint to reach millennials and Gen Z, which are the two audiences we index the highest with. They’re trendsetters and they want what’s now, [which is] why they come to SoundCloud to discover new content.