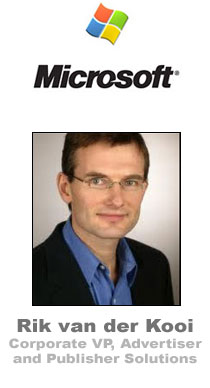 Rik van der Kooi is Microsoft's corporate VP, advertiser and publisher solutions. In an interview with AdExchanger last week at the Cannes Lions ad fest, he opens up on a range of topics, including Microsoft's relationship with Facebook, its display strategy, and the industry blow-up over its controversial stance on Do-Not-Track.

How is Cannes treating you?

I love it and hate it. I love it mostly when I'm finished with it, but there is actually a good reason for that. When you come to the end and take stock of the valuable interactions you've had with customers, partners, people from the industry, and you look at the long list of follow-ups, then you have a sense that this was super worthwhile.

When you have flown halfway around the world to be in an environment that is enticing to do different things, when you're really focused on doing a lot of work is the piece that I like less.

Which meetings are the most valuable?

We're talking to most of our large multinational advertiser clients. We have over 100 people from Microsoft Advertising here and over 400 customers worldwide, so I'm only part of some of those meetings. Tonight I'll be attending dinner with our U.K. connections, which is very unstructured. But there you get real feedback on what they like and dislike about how we go to market. It's an open environment, and that's incredibly valuable to me as well.

Would you catch us up on the Microsoft Exchange, the relationship with AppNexus, and programmatic media in general?

I'll put that in a little bit of context if that's ok. The way we're looking at the advertising industry, excluding search, is we think it isn't living up to its potential. That's a little bit to do with its early stage of development. We tend to describe it as a teenager who is growing up, where things go wrong along the way.

On the creative side, storytelling hasn't really reached its potential. But also, on the programmatic side, there's still too much friction in the system for marketers and channel partners to match supply and demand in a more automated fashion. I'll talk about that in a moment.

We have a two-pronged strategy around improving the effectiveness of the medium. One is oriented around the creative side – very much connected into Windows 8 and the evolution of experience on devices that extend way beyond an ad impression on a page. There's a lot of work we're doing in that direction, but also making connections across the phone, the slate, the laptop and Xbox and making the interaction model seamless. That's where our creative juices are going.

On the programmatic side, we are working hard on taking friction out of the system. We're doing that in a number of ways, not only by accelerating the rollout of our advertising exchange. We now have it in 15 markets, which we essentially did within eight months of the U.S. rollout.

We will continue to lead in the transparency of our offerings on these exchanges and push the boundaries of putting more of our ad offerings into a programmatic environment.

There's a third element, which is making sure that we increase the scale of our ad exchange. And we think about that in two ways: scale from our own inventory that we bring, and what kind of inventory we might have over time. Today it's mostly Windows Live and MSN inventory out there. But are we going to add Skype, Xbox, in-app inventory that might come with Windows 8? We'll look at that as a way to scale.

And we will look at increasing the connections and bringing third-party inventory to create scale. We just did a partnership with 24/7 [Media], which will make inventory from all the partners they represent available through the ad exchange, but also through the partnership that we did with Yahoo and AOL earlier this year. We're making sure we create interoperability and make that ecosystem as a whole larger and thereby more accessible for advertisers and more attractive for other publishers to come join.

There's a clear alignment between Facebook and Microsoft on search. Is there a possible partnership on display?

You're familiar with the partnership that we have on the search side and the announcement we did recently with Bing, which allows you to bring in all your Facebook buddies into your experience.

We do have conversations from time to time around opportunities for us to partner around display. It hasn't led to anything meaningful at this point. That's also because in ways we are competitors also. It's important to both of us that we are clear on where we compete and where we might align.

I could make an argument that AppNexus's involvement with the new Facebook Exchange is a form of partnership for you as well.

It's an indirect way to start to make some of those connections. I will say there is a level of philosophical alignment that over time may lead to more. But I want to be clear I'm not insinuating that there's anything happening there.

As we speak, the W3C's Tracking Protection Working Group is meeting at your offices to establish a regime for Do Not Track and how it should be executed in the browser. There are some people who aren't thrilled with the position Microsoft has staked out by turning DNT on by default in Internet Explorer 10. What's your thinking on this issue?

Microsoft has a clear point of view around consumer privacy that is expressed through the activation of the setting in Internet Explorer 10.

We're a global company. These issues are very different when you look market by market. Privacy in Europe is to some extent a different question than privacy in the U.S.  Even within Europe there are important nuanced differences. Our perspective is more informed by a global point of view.

In terms of W3C, we believe in finding solutions that are led by the industry as a whole. If everybody's going to give it their interpretation, and their own solutions, I'm not sure that's going to make the experiences better for consumers or easier to deal with.

As an industry, if we put our best thinking to it, we will come up with effective solutions that protect consumers' privacy as well as maintain the economics of the Internet. We support all the work and activity that has gone into self-regulation. Those are important steps forward through the industry associations.

The announcement about IE 10 is more of a catalyst to getting to that place and to hopefully unlocking more economic value than a huge event in itself. The underlying momentum around consumer privacy, the regulatory issues associated with it, in my mind would have us lead to more structural ways of dealing with it than where we have been with the self-regulation activities to date.

I fully understand the industry's reaction to the announcements that were made. This is the wider context within which I place it.

Numerous enterprise software companies are assembling an ad tech stack. Google, Oracle, Salesforce, and Adobe are all very active. How do you view their efforts and where do you place Microsoft on the spectrum?

Our vision in a nutshell is to provide best of breed solutions to marketers. To me it's less about whether you own a complete stack yourself or whether you partner with other parties in the ecosystem to provide that.

The stack is an undefined term. Salesforce/Buddy Media is a thin slice of the stack but not an unimportant one. What they're clearly recognizing is the value of the social platform. The social platform is a new layer in the stack, which up until two years ago wasn't defined as a separate layer. But the capability to be able to leverage social signals for any marketer is important. If you want to connect with those marketers or be effective, you will have to have a social solution or have access to that social layer in the stack.

Our view is to make sure that in the solutions we offer we make it seamless for people to take advantage of the capabilities that they require.

For marketers to be able to pick up signals from around the web, cross-platform, cross-device, cross-media, and to reach their target audiences effectively has only become harder because of the innovation and fragmentation of the stack. That's despite the huge amounts of energy that individual companies and the industry collectively has put into providing better standards and simpler ways of providing access.

We have to be able to separate for the marketer, the wheat from the chafe, whether you look at social, RTB, cross-platform access, the cost of producing and scaling media, we have to make it simpler.

The stack is an interesting concept. I'm not sure the stack will ever have a fully defined scope, or whether at the edges innovations continue to extend it. And there are elements of the stack that were valuable three years ago that are less valuable today.

As an example, ad serving was once a core component of anybody's stack. Right now it's more of a commodity component.

Speaking of ad serving, what's the right home for Atlas?

The right home for Atlas is us continuing to develop on the Atlas stack. We are looking at Atlas also in the context of new media experiences, and connecting it to the two strategic pillars that I was talking about before.

At the same time we are looking at what our partners have developed in terms of capabilities in those directions and how we best leverage some of those. We do that now through a partnership program, where other parties can add capabilities on top of Atlas.

Does Microsoft feel more comfortable offering a consumer platform with marketing plugins, or do you aspire to be a more robust marketing solutions provider?

Given the proliferation of how people consume the web there's going to be more core technology required to enable the interactions between marketers and consumers and to facilitate the interaction. In that sense we will definitely put more energy into providing marketing solutions, some of which might require writing custom code.

That's very consistent with what Salesforce is doing with Buddy. That's an example of similar thinking. There isn't an immediate media play in my mind that underlies Salesforce's thinking there.

And we see that enterprise technology will move more into the marketer's domain. Marketers are looking to bring more offline data into the marketing domain and into their CRM relationships directly.

How do you enable that? It means bringing big data crunching solutions, such as we are developing with Azure, our cloud marketing platform, into the equation.

And so I do think digital marketing solutions are going to be a way that we and other enterprise software providers will provide connections that pure play consumer marketing online ad providers may not have to the same degree. We see a tremendous opportunity to increase scenarios with a loosely coupled set of websites such as MSN, Mail and Skype. We do see a way to complete those scenarios on the creative side, and so we will continue to partnership deeply with our creative partners – creative agencies in particular.

What are the dynamics in your dealings with creative agencies? Are they as interested in Windows as they are in Xbox?

The amount of excitement around the Windows platform as a vehicle to land marketing messages has been tremendous.

Those have all now become much easier for people to think about and say, "Ok if you help us package that up, that's going to be a huge new creative canvas for us to interact."  We didn't have to sell hard to get people enthused about that.