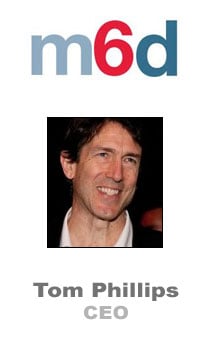 The first thing Media6Degrees’ CEO Tom Phillips wants you to understand about his company is this: the “prospect targeting” provider initially started off four years ago using data gleaned from users’ social media activity to create a consumer profile that was intended to serve as a better alternative to using demographics to connect marketers with consumers. Over time, the company evolved from looking at social media activity to focusing on more general online activity, such as looking at the kinds of content users shared or visited a particular blog.

But after years of operating in a different area of the social media marketplace that companies like Buddy Media and Vitrue have, the introduction of the Facebook Exchange could bring Media6 more directly into that social network’s orbit.

AdExchanger: How has Media6 been evolved over the past few years?

TP: We started life claiming the phrase “social targeting.” That was based on a pretty compelling theory: that people who show up at the same social media sites, would ultimately share some brand affinity. And from there, would could build some programmatic features that would allow marketers to target those likely customers as an audience. And it worked well.

So is Media6 still a social media ad network?

It was never really an accurate description. What we were was social targeting, because we used the data of social media to predict who a marketers’ likely customers were going to be and who the best recipients of a specific brand message were going to be. We were never delivering advertising on social media, which is something that a Buddy Media or Vitrue does, we were only using the data as an indicator as a sign post to find that those potential customers and deliver a brand impression.

Is the data harvested from social media, as opposed to advertising on social media sites, more valuable? Do you agree with traditional ad executives, like WPP CEO Sir Martin Sorrell, who regard social media as more of customer relationship management or promotional vehicle? And what does GM’s decision to withdraw $10 million in Facebook display advertising reflect in terms of the value of social sites as venue for brands?

As an observer and a participant in the social marketing world – but not a specific participant in marketing on social media sites – I think the space is simply in its infancy, and Martin Sorrell’s comment is provocative, which he likes to be. It’s not inaccurate, because the jury’s still out. There’s a lot of innovation to come, especially considering the announcement of the Facebook Exchange.

And GM’s decision to pull $10 million in advertising from Facebook is interesting. But there’s an important thing to note that everyone seemed to ignore: GM still spends $30 million a year to maintain a social media presence on Facebook. So what does that tell you about Facebook’s value to marketers, including that one? Well, Ford then came out and said something to the effect of “We made social media advertising work for, we don’t see the problem.”

Speaking of the Facebook Exchange, does that mean anything to Media6 directly?

As I mentioned, we have not spent our four years in that realm – we do not serve ads on social media sites. And yet, with the Facebook Exchange. We have always used social to help make decisions about where and whom, in general, to advertise to.

We have always looked at ways to take our solution to a broad array of marketers. We were able to get that data from the social media frame. But it wasn’t just Facebook, Myspace or Twitter. We knew there was other data out there, including blog data and sharing data. By 2011, we looked at “co-visitation” as a data source to show people who show up to the same sites share a similar consumer profile, so we were no longer skewed strictly by social media activity.

I want to emphasize that the Facebook Exchange is a really positive thing for the industry. It’s a good offensive move for them. As important as Facebook is, you and I could name 10 other platforms that are really interesting that are in that terrain: there’s Pinterest, Instagram, Spotify, for example. We’re not a Facebook-only world. I think there will be similar opportunities for clearer programmatic buying on those platforms as well very soon.

What’s Media6’s approach to mobile? Does the app economy change the way you gather and use data?

We are platform agnostic at this stage. We have the ability to target mobile and tablets and it’s an increasing part of our business. It’s an additional step in taking our web-based audience and doing a cross-walk to mobile devices. That cross-walk says that web-cookies can translate into those devices on predictive basis. The creative is different, but it’s pretty much the same on tablets. There’s transitional work on that front. But data applies the same way.

Do you look to any kind of specific partners?

There are a series of partners that are critical to us. The exchanges are the most important ones naturally. You turn the clock back five years, when we had a nascent Right Media and nothing else, there wouldn’t have a been a scalable business for us to pursue. Our ability to scale has been in direct proportion to the exchange marketplace. So we have direct ties to every one of the major exchanges.

The next set of partners are the DSPs and trading desks. That’s a newer class of partners for us, but just as important. The DSPs and trading desks provide a great service in rationalizing the display buying ecosystem. In our early days, when things were more chaotic, we had thought that DSPs might be a competitor to our model. But as it turned out, they’re a great complement to our performance capabilities.

We can work through DSPs and bring a solution that has a single buying interface and a single measurement and analytics backend that allows for the commodity-type buys that we don’t do and the highly sophisticated targeting that we can provide and define the next best customer – something that those other entities have a tough time doing on their own.

They can take the more conventional data sets based on retargeting and the core demo targeting from their clients. We can take the next step in finding the not-so-obvious audience candidates.