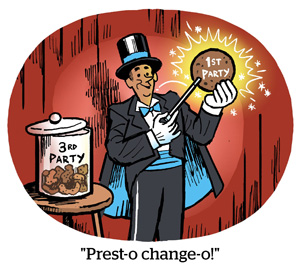 Although LiveRamp prefers to publicly minimize its reliance on third-party cookies, those little text files are the glue that connects offline data with web browsing.

“Put it like this,” said Ari Paparo, CEO and co-founder of Beeswax. “If cookies disappeared tomorrow, LiveRamp would be very affected.”

To be fair, that would be true for most ad tech companies. No one gets through the coming third-party cookie apocalypse unscathed.

But LiveRamp is situated to turn the crisis into a business opportunity, said Joe Stanhope, a VP and principal analyst at Forrester.

“Anyone that does onboarding is heavily cookie dependent, of course, but LiveRamp has a referential backbone of first-party and PII consumer data that they can translate over to the digital side,” Stanhope said. “It puts them in a pretty good position to reorient their capabilities, even though right now they still rely on cookies for activation.”

Travis Clinger, LiveRamp’s VP of global strategy and partnerships, acknowledges a portion of the company’s graph is still based on cookies. He said LiveRamp isn’t “in a position” to quantify its current reliance on cookies, but said that they’re used only for display inventory and that the shift to alternative identifiers is well underway.

LiveRamp’s big bet is on its Authenticated Traffic Solution (ATS), launched in May 2019, which allows publishers to match consented user data with a LiveRamp ID, sans third-party cookies. In most cases, the consented user data comes in the form of an email address courtesy of a registration wall on the publisher’s site.

Publishers match the email addresses they collect against LiveRamp’s deterministic IdentityLink graph of emails, postal addresses and phone numbers. Then LiveRamp spits out a tokenized version of the ID, which publishers can store either in a first-party cookie or via their content delivery network.

Sounds good. But there are a few issues.

For one, browsers could decide that the tokens housed inside ATS first-party cookies constitute a workaround they want to block.

“It’s entirely possible that the interesting solutions and innovations that LiveRamp, and others, are pitching, will go far – but they might also be nipped in the bud with browser-based solutions,” said Oscar Garza, managing partner for consulting at GroupM.

And what about scale? Publishers are wary of adding friction into the user experience and skeptical of attempts to hijack their direct relationship with readers, and LiveRamp needs publisher buy-in.

“If you look at the rate of logins and registration for many publishers [in general], it’s dismal, only a couple of percentage points of the total audience,” said Ana Milicevic, principal and co-founder of Sparrow Advisers.

Then again, that dynamic could easily change if publishers encourage people to use their email as currency to unlock free digital content, Milicevic said. “It’s something we’ll probably see happen more and more over the next couple of years.”

According to Clinger, more than 8,000 publisher domains have signed on to ATS and ATS inventory is already live on IdentityLink in the bid stream.

LiveRamp will keep using cookies while it scales ATS-enabled traffic. To help that process along, LiveRamp will release a free registration wall product for publishers within the next few weeks.

“We also have a BD team that’s out there pitching this every day; folks on the ground in Sydney, Paris, London, Singapore and Tokyo; and leading supply-side platforms white-labeling and licensing ATS,” Clinger said. “We’re really focused on scaling this thing.”

Even so, deterministic IDs such as those in ATS will never be as ubiquitous as cookies. But that’s not only OK, it’s preferable, Clinger said.

“We really don’t see this as a replacement for third-party cookies, it’s an upgrade, part of what will hopefully be a new ecosystem rooted in trust where it’s clear to consumers what is happening,” he said. “If all we were doing was replacing third-party cookies, we’d probably end up in the same position with a similar problem five years from now.”

It’s a big bite, rearchitecting for a cookieless world, and LiveRamp is going to have to prove its relevance.

One thing the company has going for it: It sits “at the intersection of every platform in the ad tech space,” said JoAnne Monfradi Dunn, CEO and founder of audience data provider Alliant.

“They didn’t build a business on cookies, but on top of exchanging data anonymously,” she said. “The industry still needs that data going forward.”

By the same token, LiveRamp is “a middleware company,” and middleware can be architected to be agnostic, said Auren Hoffman, CEO of SafeGraph and a co-founder and former CEO of LiveRamp.

“They help marketers with their integrations,” Hoffman said. “Some of those integrations require a cookie, like a retargeting company, but the fact is that many just don’t.”

And then there’s the cash. LiveRamp’s got a healthy balance sheet – around $800 million after the Acxiom sale and recent acquisitions of Data Plus Math and Faktor – which creates a more than decent runway for LiveRamp to buy and build itself into a comfortable position.

“With that much cash I think they should be able to figure out a way to work through to a cookieless world, they’ve got a lot of smart folks over there,” said Elgin Thompson managing director at JMP Securities. “I’m not going to say I’m a bull or a bear – but I wouldn’t bet against them.”