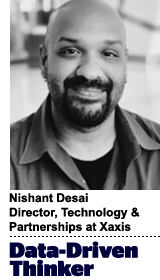 Today’s column is written by Nishant Desai, director of technology and partnerships at Xaxis.

Major advertising and media platforms are responding to privacy regulations in ways that threaten to make it harder for marketers to attribute their ad spend to its ultimate effects.

Citing GDPR, Google last year blocked use of anonymized customer IDs, instead providing only aggregated and Google-specific data to advertisers via its Ads Data Hub. Facebook and Amazon have likewise offered data solutions that work only within their spheres. Many platforms are reinforcing restrictions in light of the California Consumer Protection Act, which took effect at the start of the year.

Marketers are forced to rely on multiple mismatched data silos. Costs will likely rise as effectiveness diminishes, which will be a drain on brands, consumers and ad-supported media. Consumers will be more annoyed by seeing less relevant ads too many times across platforms. Media buyers, in other words, will have a harder time managing frequency and targeting across platforms.

To solve these issues, the industry needs a simple but sweeping change in the way users are tracked. It must benefit users and advertisers, while helping sustain publishers and safeguarding privacy.

We need a joint effort to implement a new standard for tracking users through browsers on the open web, one that – with users’ permission – assigns them a common identifier that is passed among publishers and platforms and isn’t dependent on a device or a platform.

Having that common identifier would have multiple positive effects. It would:

A browser-based ID would be similar to a mobile device ID, and would be generated by the browser. The same ID would be used by all parties to identify a user, including advertisers, publishers and ad tech vendors. This is significantly different than how cookie-based IDs are used today, with each party generating an ID that is specific to them and storing that ID in a cookie.

With cookie-based IDs, if a user clears their cookies, the ID is lost and a new ID is generated for the user. Opt-in and opt-out preferences are also commonly stored in cookies, and they suffer from the same issues as cookie-based IDs. A browser-based ID solves these issues.

There is budding support for the concept of automatically sharing unified ID info across web browsers. A Mozilla spokesperson told AdExchanger that they see “value in exploring” such solutions through groups such as W3C, the main oversight body of the open internet.

But while Mozilla doesn’t have an ad business, Google – the biggest of the walled gardens and operator of the dominant Chrome browser – does, and it’s unclear whether it would support a browser-based ID effort. Google’s announcement that it will phase out third-party cookies in two years also creates added urgency to find an ID solution.

Regardless of which companies are in the picture, if any major industry player were to show support for such an initiative, that could help bring others on board.

A similar effort was undertaken when the W3C Do Not Track standard was introduced. This effort mainly failed because a consensus could not be reached for what should happen when the Do Not Track signal was sent by the browser. The browser-based ID would pick up where this effort left off and would remedy some of the inherent issues with Do Not Track by allowing the user to set preferences in their browser, and then having the browser send the ID if the user has chosen to do so. This would remove the onus on ad tech vendors to respect the signal, since when the users opts out, no ID would exist.

Within the advertising industry, the IAB Tech Lab in September proposed the creation of a “standardized user token” that works across browser environments.

In our effort to protect users’ privacy, the advertising community sometimes neglects the unintended consequences of making platforms more powerful.

Open systems help advertisers and their partners become agile, showing that they’re engaging consumers. Having a standard for passing an identifier on the open web will help attribute the effects of ads that users see, making advertising more relevant and therefore more welcome. For advertisers, a standard identifier will help provide better insights while at the same time help reduce overall costs. It would serve as a check on walled gardens that have faced scrutiny over some of their privacy practices.

Rather than focusing on how well a tech stack is being managed, browser-ID transfer would enable advertisers to better gauge how well they’re driving performance and encouraging purchases and visits to websites and stores. Instead of the un-fun stuff of managing identity and fretting over data transfer, we’ll talk about outcomes.

With a unified and open approach to identity tracking, tech providers and marketing partners will have to compete on the basis of how well they are driving performance. And as a huge added benefit, we’ll help preserve and strengthen a transparent, fraud-free and privacy-protected open web.