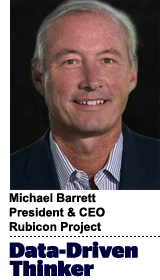 Today’s column is written by Michael Barrett, president and CEO at Rubicon Project.

For the first time in my career, ad tech’s independent players are embracing a powerful idea: Collaboration makes us stronger.

It’s a dramatic reversal for an industry built on proprietary technology. But after years in which Google grew and grew while the rest of us peddled our own “secret sauce,” it’s clear that going it alone can only get us so far. This is true for two reasons.

First, a fragmented landscape overwhelms decision-makers and reinforces the perception that the biggest choice is also the safest.

Second, it encourages those that do choose independent vendors to hedge their bets by adopting multiple partners – each with its own technical idiosyncrasies and transparency standards. This disperses ad spend, drives up fees and makes buying the open web that much more difficult. But it also deprives smaller players of the scale and funding to reach product parity with those at the top. A vicious cycle.

That said, ad tech’s black-box era is giving way to one in which companies collaborate on shared interests so they can focus on competing in areas that are genuinely strategic. The best example of this is Prebid, the open source project that in two years has grown from a fledgling experiment to the industry’s leading independent, header-bidding framework. My company, Rubicon Project, co-founded Prebid.org with AppNexus in 2017.

Today, hundreds of the world’s largest publishers use Prebid to manage their programmatic auctions, more than 15 companies are members and nearly 500 developers have contributed to its code. At this point, the project has saved independent players tens of thousands of hours of custom development work and facilitated billions of dollars in ad spend.

Jeff Green, CEO of The Trade Desk, has noted that in about seven years, advertising will be a trillion-dollar industry – one of just a handful in the world. I agree. Much of that spend will move to programmatic, and with the way things are headed, much of it will pass through one or two walled gardens. In other words, this space is scaled, fast-growing and ripe for open source disruption.

If this sounds like a long shot, it’s not without precedent. Take Linux, the open source operating system started in 1991 by a computer science undergrad. For decades, Microsoft battled Linux aggressively for share of the enterprise server market. They saddled the operating system’s partners with patent violation claims, incentivized hardware OEMs to prioritize Windows and spent millions on combative PR campaigns. In 2001, Steve Ballmer famously called Linux a “cancer.”

Still, the open source project flourished. Linux’s flexibility, transparency and value inspired a fiercely loyal developer community, and companies like Red Hat packaged it for the Fortune 1000 with high-quality tools and support.

By 2017, around 70% of enterprise servers were running Linux, and Microsoft’s hatred of open source was pivoting to an all-out embrace. Today Redmond is one of the largest developers of open source software in the world, it owns GitHub, the biggest open source code repository, and is in the process of adding a Linux kernel to Windows itself. Meanwhile, IBM bought Red Hat last year for $34 billion.

If Linux were the product of a stand-alone company, it never would have survived the Microsoft juggernaut. Instead, it’s a case study in what’s possible when disparate, competing groups work together to build software. My bet is that Prebid takes the same course: As its community grows, its capabilities will evolve from a header bidding framework to full monetization stack – the world’s first open source advertising OS.

I’m not naive enough to suggest that Prebid will somehow replace Google. But it will lead to greater choice, save independent companies hundreds of millions in development costs and push the walled gardens to adopt more transparent and collaborative practices.

Ad tech’s open source era is here, and it’s going to be awesome. I encourage everyone to help shape the industry’s future by supporting community-driven projects. The more of us that band together, the stronger we’ll be.