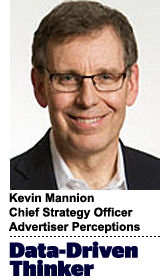 The recession’s coming, or it isn’t.

TV will shift to digital.
TV will see no erosion.

When you ask those in the ad spending community if they expect a recession, as I have, you will find that they are decidedly undecided.

When you ask whether they expect to increase spending, they are overwhelmingly bullish, even if they believe a recession is just around the corner. When you ask whether they will spend less with Facebook due to the Cambridge Analytica fallout, a sizable number say yes. But if you look at Facebook’s earnings, you would scratch your head at any such predictions.

And when you ask advertisers point-blank if they will allocate TV dollars to digital, they will, by and large, indicate that the shift is already well underway. But if you ask if they expect to maintain their spend in TV, the answer is likely to be yes.

F. Scott Fitzgerald wrote, “The test of a first-rate intelligence is the ability to hold two opposed ideas in mind at the same time and still retain the ability to function.”

Perhaps we are seeing genius at work. Or has Madison Avenue gone simply, well, mad?

When the first Iraq war unleashed a recession in 1991, I can recall the feeling of walking in the dark about ad spending. I was a regional manager for a market-leading high-tech media publication. Based on conversations with marketers and agencies, we believed then that we as sellers would be impervious to any recession. But then the spending stopped.

The lights went out, so to speak, for sellers in January 1991. And to make matters worse, we couldn’t get answers. In a recession, marketers need to reevaluate their spend. In large part that is because their organizations are in the midst of a dark night seeking to know whether it is better to continue to spend as planned. And if they see competitors turning off the spigot, is it better to follow suit or to seize the opportunity for a greater share of voice?

In recent conversations with the AdExchanger team, we discussed likely marketer responses to a possible recession. Based on that chat, I polled advertisers for their thoughts. I learned that marketers seem equally divided on whether they believe a recession will arrive in 2019.

But as a group they seem certain that whether or not one appears, they will increase their spending – not simply maintain it. Most believe that even in a recession, a dollar spent in advertising produces results.

And yes, they do believe that it is the optimal moment to take share – they anticipate that their competitors will cower from planned marketing levels to protect against unbalanced P&Ls.  On the other hand, when recessions hit, marketers do tend to tighten their purse strings – probably in most cases against their best instincts.

If history – and recent trends – are guides, I think we can sketch the rough outlines of possible effects from the Big Maybe Recession of 2019. There are five points germane to the digital marketplace:

1. On the sales side, more will be given to those who have more, at least in terms of share. Market leaders tend to gain share in times of depleted spending. Who will win? Google for sure, and probably Facebook (more on this in a second). In ad tech, yesses to The Trade Desk, Adobe, Salesforce and probably Oracle. Strong category players – Twitter, Hulu, Pandora – should be fine.

2. Then there is Amazon, which is unlike the rest because it has access to dollars not traditionally connected with digital media. Amazon Advertising has a uniquely powerful media and programmatic dollar pipeline – market development funds and coop dollars tied to revenue from vendors that return a percentage of revenue to Amazon for every dollar sold. When Adidas sells a $50 gym bag, a dollar or two or more may go back to Amazon to promote Adidas products within the Amazon shopping aisles or follow shoppers on the open web with retargeting ads. I would expect Amazon to be fairly impervious to a recession.

3. What about Facebook? There is a Fitzgeraldian dichotomy at play here. Advertisers will say that they do not believe Facebook is out of the woods with the troubles that began with the Cambridge Analytica revelations, yet earnings indicate otherwise. For advertisers who believe they have too much invested in Facebook with no strong third option beyond Facebook and Google for the lion’s share of their spending, is FB too big to bail? Yes and no. I think Martin Sorrell was really onto something at CES when he said that advertisers will likely move a portion of their dollars sideways – from Facebook to Instagram. But will FB keep up with – or outpace – Google? That is a likely no, in my view. Expect Facebook to continue to grow, but not at the levels we have become accustomed to – at least during this challenging moment in its 15-year lifetime.

4. Social, video and search will remain healthy in spite of downturns. Conversely, The Great Recession was a killer to print. While newspapers and magazines were in decline well in advance of 2007, the recession hastened their days of reckoning. And after the recession lifted, print continued to bleed profusely. Expect more of the same in the Big Maybe Recession of 2019, with digital publishers, second-tier TV networks and ad tech partners in scramble mode.

5. Expect advertising spend to be a leading indicator for the end of the recession. In our surveys during the Great Recession of 2007-2009 – I’m referring only to the United States here – we saw advertiser spending optimism pick up as early as 2008 and increase significantly throughout that year, well in advance of economic growth indicators. Advertisers are a bullish lot. They tend to want to spend, and then they want to spend more. But the trajectory of their forecasts, in our experience, will indicate just how long the Big Maybe Recession lasts.

Are those advertisers who believe in a recession onto something? Definitely. Maybe.