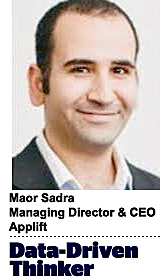 Today’s column is written by Maor Sadra, managing director and CEO at Applift.

The volume of data handled by mobile marketers is tremendous, and because of the fundamental role automated technologies play in this process, performance marketing isn’t exactly marketing as we know it – it is sales operation on an enormous scale.

Managing mobile ad campaigns requires an entirely different skill set than overseeing the strategy, production and distribution of a television ad. Mobile marketers send hundreds of iterations of their ads out into the world and rely on machines to determine which version works best – and on which traffic source, at what time and on which operating system, to name just few variables. A media buyer has a quintillion permutations to choose from when buying impressions from a single demand-side platform. Humans – even the marketing kind – cannot digest the magnitude of this number.

It is machines that make the decisions. People have a role, of course, but that role is primarily to calibrate the machines and interpret data. Product teams are more suited for this than traditional marketers. Product teams have access to data and possess the know-how to run and tweak algorithms to determine what works and what doesn’t based on numbers.

Unlike traditional marketing, there is rarely room for instinct or inferences. Even tasks such as creative A/B testing are no longer about ad design, but rather, a question about whether video 13.2 led to a higher day-seven retention rate than banner 7.4.

Over the next three years, I predict a growing number of mobile app developers will hand over the reins of their marketing to their product teams, in acceptance of the truth that performance marketing is a different beast.

Some large app developers are already thinking that way. A large mobile app company I know of in Asia has its product team managing its entire mobile marketing budget. And one of the biggest mobile app companies in the world relies on a team of 40 data analysts and 40 data engineers to run its marketing.

These people live and breathe data – that is it. There is no onus on creativity, interpersonal skills or relationships – all things that matter in traditional marketing.

Fraud acts as a trigger towards change

Companies are rethinking the makeup of their marketing teams because they want to drive more effective campaigns. But there is another driver here: fraud.

Product and business intelligence teams are more adept at detecting suspicious traffic patterns than most marketers and, as such, many mobile app developers want these teams to play a bigger role in marketing.

Many marketers have conflicting views about fraud, especially attribution fraud. On one hand, they want to fight it. Fraud is waste, it skews statistics and, well, it’s fraud. On the other hand, attribution fraud helps some marketers reach paid marketing goals, at extremely low customer acquisition costs – at least on paper. Plus, there is not always an incentive to shine a spotlight on a solution.

If performance marketers want to improve their chances of “winning” the fight against fraudsters, they need their product teams on the inside. Most marketers realize this, and those that don’t will realize soon enough or risk losing ground in the increasingly competitive mobile app space.

That alone is good reason for mobile marketers to let data scientists take hold of their marketing reins.