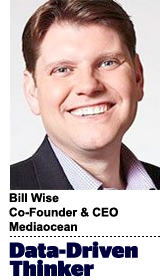 Today’s column is written by Bill Wise, co-founder and CEO at Mediaocean.

This month marks the end of a decade in which the digital advertising industry came of age. When we think about where we are now, it’s almost unimaginable to consider where the 2010s began: Netflix was still mailing DVDs, Snapchat was just an idea on a college campus and Uber didn’t exist.

With that in mind – and knowing the pace of change will only accelerate – imagining the digital advertising industry in 2030 feels daunting. But if we look carefully at the major trends of the 2010s, we can begin to see the contours of the 2020s forming already.

Three in particular stand out as potential through-lines for the coming decade. By watching how they progressed over the past 10 years, we can get a good idea of where our industry is going over the next 10.

The internet’s growth during the 2010s helped transition digital advertising from a major factor in the advertising landscape to the major factor. In 2019, for the first time in history, most of all global ad spending was on digital advertisements – a staggering $298 billion in online ads. The story of the last decade wasn’t so much that the takeover happened as how quickly it happened. In 2010 global digital advertising was still about on par with print advertising, and less than half annually of what it is today.

What’s next: In the next decade, digital advertising spend will eclipse $500 billion annually while all other platforms – radio, TV, print, etc. – will stay largely stagnant as they recede further and further into niche roles within the attention economy. At a certain point digital’s dominance will be so pronounced that we will stop referring to non-digital channels as “traditional.”

2. A triopoly dominates the industry

In 2010 Google controlled 44.1% of the relatively nascent digital advertising market, with no other company at a market share higher than 8.3%. Since then the search engine has kept a mostly stable position in the market; the decade’s most significant developments were the emergence of two major Google competitors: Facebook and Amazon. While neither threatens to overtake Google, they’ve established themselves as the second and third players in a triopoly that collectively controls about 70% of the market.

What’s next: Amazon’s strategic investments and market advantages will lead it to overtake Facebook with the second-largest market share in the coming decade, while the triopoly’s overall share of the market will largely hold steady. That means a combined $350 billion in annual ad revenue could be split among the Big Three once my first prediction comes to fruition.

However, there is one big caveat: The Big Three will only reach that number if they aren’t broken up first by new market regulation, and I predict that will indeed happen in the 2020s as Big Tech comes under increased scrutiny from the federal government. This begs the question: Which emerging players outside of the triopoly will rise up to compete with the remnants of Google, Facebook and Amazon? Major enterprises such as Walmart and TikTok are making significant investments and will likely step up, but another trend to watch here is identity marketing.

The proliferation of available data – thanks in large part to the significant portion of life now conducted online or with mobile devices – and companies’ ability to collect and process said data has enabled enterprises to collect a much more comprehensive set of identifying information on every consumer than ever before. Companies’ ability to master this new strand of marketing will determine the next major players in the market.

California’s Consumer Privacy Act and Europe’s General Data Protection Regulation were the first major regulatory measures aimed at disrupting the data collection processes that came to play a defining role in the marketing industry for most of the 2010s. While their full impacts vary, each serves as proof of influential regulatory bodies’ ability to pass and implement measures that restore data ownership to the user.

What’s next: As I alluded to earlier, look for the role of government regulation to increase in the coming decade, especially when it comes to Big Tech. In the 2020s, major enterprises such as Google, Facebook and Amazon will be forced to relinquish data ownership to independent entities outside of their own walled gardens, potentially with the aid of blockchain technology. In fact, look for an enactment of something similar to presidential candidate Andrew Yang’s proposal to give every individual ownership over their own data.

If past is prologue, whatever changes we experience in the 2020s will be staggering when viewed through the lens of what the digital advertising world looks like today. We’re already on the cusp of some seismic changes to the way the industry treats identity, and more will surely come, whether from new regulations or new technologies.

The only real certainty of the next 10 years is that expert predictions for the 2030s will scarcely resemble what was written today.