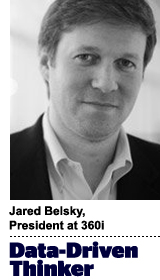 Today’s column is written by Jared Belsky, president at 360i.

It’s no secret that there’s been a massive uptick in media reviews in recent years, a trend that shows no signs of slowing.

Unsurprisingly, the increasingly common RFPs have coincided with increasing complexity and fragmentation in media – a challenge that has many marketers struggling to decide which side of the “specialization vs. scale” debate they should be on.

While both are important, I would argue that, increasingly, scale is table stakes and specialization rules the day. Little things come together to drive big changes and add up to big results. And when you start to peel back the layers of complexity surrounding the modern media landscape, you’ll find three key issues driving accounts into review time and again: perverse incentives, a lack of specialized skills and misaligned metrics.

For many major advertisers who spend significant money on media, the focus tends to be scale and large platform-level deals that move headlines and consumer tastes.

However, none of that magic happens without the necessary fundamentals. No matter how pretty the package, without incredible resources to figure out cross-screen tracking, tagging, attribution and data pass-back of margin, nothing else matters much. For example, I’ve seen a number of clients write off the display channel as ineffective when, in truth, the issue is poor tagging architecture that doesn’t account for the cross-screen impact of mobile.

Essentially, poor ad tech can result in a false negative, which leads to client confusion about what is working or not working. So these seemingly small things are important. Yet despite their importance, these very specialized capabilities are often the last thing the client wants to pay for and are almost always the first thing procurement muscles out.

This creates a perverse incentive for agencies: If they can’t get paid, they won’t staff up and advertisers don’t get what they want. It’s a lose/lose situation, but one that must change.

Generalists Are Not Enough

Today, agencies are trying to accomplish tougher goals with less compensation and more specialized media. That sounds like an unsolvable math problem, right?

And yet, to solve it, the majority of the media landscape is using a far too generalized method. They are dressing up “Billy the display buyer” as someone who can handle programmatic, paid social, online video and things like Thrillist or BuzzFeed.

Yet, as many of us know, to really move the needle in paid social, for example, you need expertise in platforms, bidding, creative and segmentation, along with an understanding of how to import first-party data – then multiply that by at least four to account for the biggest platforms: Snapchat, Instagram, Twitter and Facebook.

Can we then expect that same person to also be fluent in attribution? Ha. If you can find me Billy, I will double his salary.

As it goes, big media RFPs love to count things that can be counted. This especially includes “media savings.” In some cases, media savings is a fine metric. But for a client with a $50 million advertising budget trying to disrupt a category, this is not the singular metric to focus on.

In fact, a higher CPM for large canvass and better targeting might very well be the best area of focus. Paying twice the CPM to ensure a client’s video ends up on premium locations like Hulu or YouTube versus dictionary.com, below the fold, at 2 a.m. is a very rational plan – it just depends on the context.

Too often, the metrics used to guide payment to agencies actually set up the agency team to make decisions that are not in the best interests of that very client. And to determine this, advertisers need and want specialized media practitioners – from paid social, search, display, content, programmatic and, yes, traditional – all with a seat at the table rather than downstream from planning, ready to take the deli-counter order.