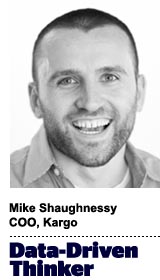 Today’s column is written by Mike Shaughnessy, COO of Kargo.

Publishers and ad tech companies have lately been treated to some interesting new information about how Google has managed its programmatic advertising business through the years.

Specifically, they have learned about Project Bernanke, a secretive program in which Google cut previously undisclosed deals with big partners like Facebook to assure preferential pricing and winning bids. It also adjusted revenue share to guarantee that bids clear price floors for those big partners and it dynamically changed floors based on historical bid data. Google exposed the details in an unintentionally unredacted court filing that was obtained by the Wall Street Journal.

We in this industry are shaking our heads, saying “it figures.” It would be surprising if Google did not have secret deals with other big companies or that they did not over-engineer their technology to have total control over which ad is placed where and at what price. Google is a for-profit business with little government oversight.

More important is what happens next.

The technical details of Project Bernanke may be mystifying to folks at the Department of Justice, the Federal Trade Commission or the many courts in the US that are hearing cases – for example, how floor prices work or why it’s reasonable or not reasonable to dynamically adjust them. What will nevertheless be clear is that Google has too much power and control across too many parts of digital advertising. There is a distinct possibility that these revelations, along with the many lawsuits pending against Google, will lead to a corporate breakup.

Our industry needs to have an active hand in dictating what that breakup looks like. Done right, this trust-busting exercise will preserve the real value Google’s technologies provide to publishers and consumers while diminishing its unfair advantages. Done wrong, the ad tech industry impact could be neutral or negative.

Let’s make one thing clear – Google is the programmatic advertising business. It owns a DSP, ad server and SSP. It owns the top browser on the web. It’s one of the largest publishers online. The company is the end-to-end supply chain and the customer all in one.

If Google really were forced to divest some of its products, there are multiple ways that could happen.

One scenario separates Google’s content properties, like YouTube, away from its ad technology business. For the ad tech industry, this kind of breakup would need to require that YouTube inventory needs to have the same functionality and availability into other SSPs/DSPs as other publisher content.

Another prospect is that Google’s search business is broken away from its display business. This scenario would disrupt a lot of Google’s earning channels, as it could make it harder to offer the same AdWords search-plus-display advertising package to the millions of small businesses that are its bread and butter. When it comes to monopolistic offerings, AdWords is clearly at the top of that list online, and this type of breakup would hit Google hard. But, again, for the ad tech industry, this is not the crux of highly meaningful.

For display advertising, the real issue is Google’s integrated DSP and exchange platforms.

What the industry doesn’t know is whether Google’s DV360 leverages the insights it has about the floors publishers have set. Does Google use its ad server to train its SSP — optimizing in Ad Manager based on the information it has into other partner bids from companies like Kargo, IndexExchange, OpenX and other SSPs? Using information in this way would give it an unfair advantage over the marketplace.

These nuances should not be overlooked. It’s up to people in our industry to set the record straight – to make it clear to regulators and office holders that DV360 contains an unrivaled storehouse of pricing history, won bids, floors and other programmatic market intelligence. Ideally, Google will have to choose to be on the buy side or the sell side, and give up its end-to-end ownership of every ad placement.

Google is ready for this fight. In an email to The Verge, a Google spokesperson said the 2020 complaint against Google by Texas Attorney General Ken Paxton and “misrepresents many aspects of our ad tech business. We look forward to making our case in court.” Technically, there are likely to be holes in the case, but the larger issue is Google’s outsized influence on the advertising market overall.

Because of that, Google does need to be broken up, and how that happens is the difference between a healthy advertising market and one that continues to be dominated by a single titanic player.

Now that government entities are jockeying for more muscular regulation of Big Tech, all of us operating in Google’s shadow have a responsibility to advocate for an optimal outcome.