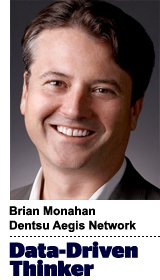 Today’s column is written by Brian Monahan, global client president and head of US ventures at Dentsu Aegis Network.

While the shift to programmatic has been slower than some have thought, the impact to the underlying craft of media planning is even more profound than many could have imagined.

As media consumption moved online, a whole new world of data opened up, enabling marketers to understand consumers beyond whatever media they favored. This allowed us to think about and reach audiences in an entirely new way – making traditional media planning a thing of the past.

Twenty-five years ago, desktop PCs transformed how brands went to market – a revolution led by the humble cross tab. Any media planner with access to Simmons or MRI software could quickly and easily produce indices of the type of media programming consumed by their target audience. Back then, target audiences were not much more tightly defined beyond age and gender. Simple cross tabulation allowed armies of media planners to sift through the growing array of cable TV channels and magazine titles to find the exact right mix of media.

Fundamentally, the craft of media planning was the study of media consumption. We worked backward from understanding the media consumed to understanding consumers themselves. It was through content choices that we derived the necessary clues for influencing people. Because ad insertion was static, by understanding who consumed a particular media property – with allowances for a tremendous amount of untargeted “waste” impressions – we could devise schedules that created effective reach and frequency against the subset of people we actually cared about. Young media planners spent hours with reps from media properties and commissioned millions of dollars of research to really understand the role of a particular media property in a person’s life.

This was the craft of media planning.

Then the media world went digital.

Digital “pages” were rendered dynamically, allowing ads to be inserted to discrete audience subsets. Then we started cookie-ing, authenticating and building vast user profiles that pull in data beyond media consumption. We now understand people independent of their media choices, not through them.

Audience planning is different than media planning in the following ways:

As an industry we are just starting to really come to grips with this change. What we know now is that successful audience planners:

Their competitive advantage comes from access to unique data and the ability to cover the full-market opportunity through higher match rates. They can quickly model what audience attributes are really driving success. Audience planners also have the underlying ability to execute what is drawn on a white board.

The unintended consequence of audience planning has been the devaluation of premium contextual environments. Expensive-to-produce content cannot command a premium when other media environments reach the same people.

There are significant concerns about the erosion of the revenue model for free, ad-supported content. The rise of brand studios and 360-degree sponsorships show how premium content producers are innovating beyond the intrusive ad model, which never allowed brands to take advantage of the contextual environment. For scaled ad stock, publishers now monetize based on match rate vs. subjective quality of their editorial environment.