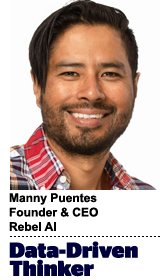 Today's column is written by Manny Puentes, founder and CEO at Rebel AI.

According to the IAB's Outlook for Data Report, marketers plan to spend more money on data than ever. But just as investment peaks, questions are arising about the accuracy and legitimacy of this proliferation of data. Location data in particular has been in the spotlight recently, with some reports claiming that up to 80% of lat/long data in the bid stream is fake.

Marketers spend around $17 billion on location data generated by consumers, but there is often no transparency about where it originated or its accuracy. To satisfy the demand for scale, vendors often buy other location data sets to supplement their offerings, with no way to trace back where the data came from. Today, the ad tech ecosystem lacks a basic standard for how advertising platforms should pass location data, let alone verify it.

To make matters worse, this type of information is extremely easy to manipulate in today’s ad tech marketplace, particularly within the mobile in-app ecosystem. Any metadata within an ad request can be spoofed, including location data, and altered data can easily be passed into platforms and subsequently used to target consumers. As more and more unverifiable or unverified data is used in the bidding process, the likelihood of inaccuracies in these streams rises significantly.

To combat this, today’s marketplace requires a new approach. The industry has traditionally been reactive when approaching fraud – identifying after the fact that something was falsified and scrambling to add detection for signs of suspicious activity. But rather than flagging falsified coordinates, we need to bring a security-first, end-to-end mindset to advertising, verifying data authenticity before it is ever used in the bidding or ad-serving process.

The industry could create a standard around digital verification of location data, and any metadata used in the bidding process for that matter, so the data can always be traced back to its origin. Bidders today use the metadata they are passed, like latitude and longitude to target consumers, but they aren’t verifying that those parameters match what the original ad request actually sent, which allows for intermediaries to manipulate it.

To remedy this, the standard could specify that the bidder would always append the same parameter values used in the bid criteria to the creative itself, so that the original parameters could be compared to the parameters used in the bidding process, allowing for closed-loop verification.

This ensures that the location values that were originally sent always match the location values used in the bidding process. This type of closed-loop verification process ensures end-to-end metadata matching, eliminating the potential for data to be altered in the supply chain. In conjunction with this standard, we would also need to create a similar certification for mobile apps to prevent the falsification of location on mobile devices.

By authenticating this data end to end, we can start to pass accurate, reliable and verified location data, creating real value for advertisers and real security for the growing data marketplace.