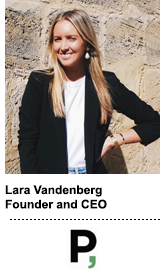 CEO and founder Lara Vandenberg had been planning to launch her new venture, Publicist, in mid-March.

But the idea behind the startup, an online platform that connects freelance marketing talent with brands and agencies, is doubly relevant in a rocky economic environment. Publicist launched on Tuesday.

Vandenberg had been testing the platform in market for about two years after observing the industry shift toward more freelance and project-based work. She noticed that talent was difficult to find and often brokered by expensive recruiters, while freelancers were too burdened by business development to maximize time spent on work.

“For clients and agencies, quick access to premium talent is really hard,” Vandenberg said. “[And] on the freelance side, it’s hard to do good work while also needing to focus on your business.”

While working as the head of marketing and communications at Knotch, Vandenberg began connecting agencies and brands with freelance talent as a side project. She brokered intros for services that didn’t fit neatly into retainer or AOR relationships, such as content creation and Amazon marketing.

“People were coming to me as a resource and saying, ‘I need 20 events people on the ground at CES,’ or, ‘I need five social media managers. Who can you connect me to?’” she said.

By late 2018, Publicist had evolved into a bustling marketplace connecting vetted senior marketing talent with major brands, including Apple, IBM, Microsoft and Nike, as well as DTC startups, such as Away, Glossier and Casper. In late 2019, Vandenberg quit her day job to focus on Publicist full time.

But just as Publicist was gearing up to launch in early 2020, a strange virus began infecting people around the world. By March, it was clear the situation would worsen in the United States too.

Vandenberg was then infected with COVID-19 herself. After recovering, she flew halfway around the world to Australia to be with her family during the crisis. At that point, Publicist’s launch date was pushed back indefinitely.

“When you’re launching a company, you need to be conscious about timing,” she said. “There was a lot of hysteria. People wanted information about COVID.”

Ultimately, the crisis only set Publicist’s launch back by five weeks. And the pandemic has only confirmed Vandenberg’s thesis by accelerating the trend toward more freelance work as employees are furloughed and laid off. More senior marketers are also joining the platform as they experience turbulence at their full-time jobs.

By the same token, as companies cut costs, they’re rethinking what services to outsource and what to keep in house.

Sign-ups on the platform among both companies and freelancers are up six to eight times from before the crisis, with increased demand for reputation management, crisis communications and virtual event-related skills.

“COVID has allowed me to work harder to support industry change that I think is going to accelerate,” Vandenberg said. “Publicist can help rebuild a recently out-of-work workforce.”

While launching a business in the middle of a pandemic has been far from ideal, it’s also been a valuable gut check for Vandenberg’s initial vision.

“While it was absolutely stressful, I knew I was doing the right thing,” she said.