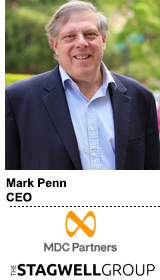 The Stagwell Group, a new-model agency holding company helmed by former Microsoft chief strategy officer and political advisor Mark Penn, said Friday it will invest $100 million to take a 30% minority stake in MDC Partners. Penn will become CEO and sit on MDC’s board.

The news caps a six-month search at MDC for a replacement for former CEO Scott Kauffman, who stepped down in September.

“I have admired MDC for a long time and believe wholeheartedly in its mission,” Penn said in a statement. “I am eager to begin applying not only our investment and resources, but also a plan based on my expertise, towards growth and the creation of significant value for our shareholders.”

“That theme of combining creative and digital is not a new one in today’s marketplace,” said Jay Pattisall, principal analyst at Forrester. “There’s a tremendous opportunity for them to grow one another’s business organically because they work on different aspects of marketing.”

MDC has been under financial pressure since 2015, losing half of its stock value in the past year as its market cap dropped from $1.5 billion to $250 million under a heavy debt load. The financial issues date back to former CEO Miles Nadal, who was investigated by the SEC for improper accounting practices and trading of company securities.

Nadal eventually reimbursed MDC Partners with $10.5 million for inaccurately documented medical and travel expenses during his tenure, but investors had already soured on the holding company and its stock tumbled 30%.

Penn will have a lot of work to do to get MDC Partners back to growth. The holding company reported earnings Friday with revenue declines of 2.3% in Q4 to $394 million.

“The task is a financial one, in terms of creating a strategy to draw down their debt in such a way that they’re able to put the agencies in a position to flourish and grow,” Pattisall said. “[Stagwell’s] investment in MDC is a first step.”

Penn plans to create $35 million in cost savings in the first year by consolidating back-end resources and cross-selling media and creative services, according to the Wall Street Journal. While Stagwell and MDC will remain independent companies, Penn sees opportunities for cross-selling and collaboration between the two groups.

“The complementary nature of the Stagwell companies and MDC is significant,” Pattisall said. “They’re not a competing set of agencies that will be fighting over the same clients and assignments.”

Stagwell, launched in 2015 with $250 million in funding, works with blue-chip clients such as Comcast and Mastercard. Unlike traditional holding companies where sister agencies have a history of competing for business, the group is set up to foster collaboration between business units “to serve clients in a more nimble and cost-effective way,” Penn told AdExchanger in a previous interview.

That culture differs from MDC Partners’, where agencies act autonomously, and could be a challenge for Penn, Pattisall said.

“It’s about allowing those creative cultures and the things that have made them successful stay in place tact while creating incentives for collaboration,” he said.

Still, MDC’s biggest hurdle is largely financial, and the group has had a recent spate of new business wins, including Goldman Sachs creative account at 72andsunny and Petco’s creative business at Anomaly.

“This could be the start of their turnaround,” Pattisall said.