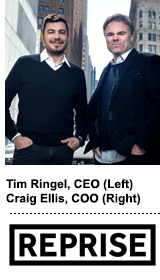 The combined agencies unified under the Reprise brand because it had the broadest footprint, with 60 offices in 40-plus markets, said Tim Ringel CEO of the new Reprise.

When digital was new ten years ago, holding companies spun out specialist agencies around disciplines like search, social, mobile and programmatic. Now these channels are melding, and separating agencies by channel tactics no longer makes sense to reach a cross-device audience, said Ringel.

“Our clients want to use audiences across channels,” he said. “They want to create seamless customer and brand experiences.”

Collapsing the agencies wasn’t about cutting costs, but creating an offering clients were already asking for, Ringel said.

Reprise has retained its current clients, including Sony, ABInBev and Amazon, and also absorbed clients from Ansible and Society.

Clients are “actually quite relieved” about the change, Ringel said.

“They know they have to bring everything together anyways,” he said. “They simply had to talk to too many brands within IPG Mediabrands.”

Reprise will house a single media department that staffs search, social and mobile experts, a service that brings in 70% of revenue. The remaining 30% comes from non-paid media, content development, creative and experience design like web and mobile app development. The agency runs programmatic through IPG Mediabrands’ specialist unit Cadreon.

The transition has been relatively smooth for employees, especially junior talent who were asking for more experience across channels rather than being pigeonholed into a certain specialty like social or search, Ringel said. The company’s voluntary churn rate has decreased 66% year-on-year, and headcount has increased 40% to 2,400 since launch.

“In many cases, corporations forget why people work in these businesses,” he said. “The biggest task for any leader bringing businesses together is to define and build a culture that gets people excited.”

Merging three management teams was also a challenge, Ringel said. Most high-level execs have stuck around – Ringel pointed to Society’s former managing director, Rob Bernstein, who will head up Reprise in the US – but others have left.  Ansible CEO Travis Johnson left the company shortly after Mediabrands CEO Henry Tajer in May 2017.

But the agency has made 26 leadership appointments across the globe since launch. And nine months in, Reprise has major buy-in from its parent company and a few new (undisclosed) business wins in the pipeline.

“IPG looks at Reprise as one of the new shining brands in their portfolio that can change the way people look at it from a digital-first perspective,” Ringel said.

Correction: This story previously said Chris Loll was COO of Society. He was COO of Mediabrands.