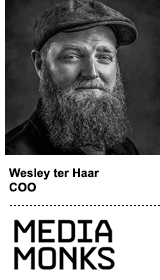 But when the agency’s parent company S4 acquired MightyHive in December 2018, MediaMonks’ value prop expanded to include performance advertising.

Together, MediaMonks and MightyHive will put creative, production and performance marketing on one team, rather than siloing them in specialty groups as agencies often do. Both agencies operate under a single P&L and are already co-locating offices in certain regions.

“Most networks are working diligently to get those teams to work together,” said MediaMonks founder and COO Wesley ter Haar. “We’re integrating at the core.”

In a typical campaign, MediaMonks will create between 40 and 400 platform-specific assets based on a creative idea, media plan and data. An execution on Snapchat, for example, would differ from one on Google, making integration with performance media teams crucial.

“It’s not one size fits all,” ter Haar said. “There’s channel-specific content that goes into it.”

As MediaMonks works closer with MightyHive, it will retain its own clients, which have little overlap with its sister agency and are split evenly between brands and agencies in need of a scaled production partner.

“We’re introducing each other’s capabilities to our shared client list and going after some new clients together,” ter Haar said.

AdExchanger: What’s changed at MediaMonks since being acquired by S4?

WESLEY TER HAAR: Production has gone from project-based to foundational as brands want to compress their time to market. They’re under pressure, but a lot need more stuff. It’s allowed us to bring in more relationships in different structures.

For in-house agencies it’s plug-and-play, augmenting their marketing team and scaling it around the globe. Where there might be five to seven agencies working together, we plug in as a scalable, high-touch production partner.

How do you speed up the production process?

It’s about using platforms at scale. Most of it revolves around Google, Facebook and, increasingly, Amazon. We’re making sure we really understand the context of those platforms.

Then it’s about workflow. [Our] way of working is less steps and no silos. Traditional agencies have become too complex. It wasn’t a great idea to split creative and media. I don’t think today you can have one big idea. It’s a creative framework, but it’s multiple ideas driven by data, channels and personalization.

How are you working with MightyHive today?

Companies that only look at performance only get an [understanding of] media. Agencies that focus on creative only think about if the creative resonates and delivers. How do you bring those together in an always-on fashion? We’re working on that for some of our clients already.

We’re relatively new together, but we’re building a shared production team where programmatic is in the same room as content creation. That type of model structured around the client is what we’re going to be doing most of next year.

What’s the status of programmatic creative?

It’s a really interesting landscape. We work with a variety of up-and-coming vendors. There’s lots of VC capital. But we haven’t picked a winner.

We’re mostly looking to be flexible while making bigger bets on the Facebooks and Googles of the world. They’ll end up winning or buying whoever wins.

Will in-housing become a bigger focus for you as you work closer with MightyHive?

It’s definitely a focus, but we’re not a traditional body-shopping operation. We’re really looking for the right talent.

We’ve been building bespoke teams around the globe for our clients. We’re seeing more [engagements] where we build a team and the client takes it over.

Why are marketers bringing production in house?

It’s that frustration of taking five days to get onboarded by an agency but wanting to be online in three days. They don’t have the time anymore to wait and wait.

The challenge always is talent. Production especially is a talent-driven industry. We’re seeing a lot of clients build core capabilities and roles internally and bring us in to structure that.

Who do you compete with?

It feels like everybody competes with everybody, but everybody also partners with everybody. It’d be really interesting to see the pitching lists clients are putting together because it’s a bit of everything.

Are agencies more reluctant to work with you now that you’re owned by S4?

We haven’t seen that so far. I don’t think we’re competing with the typical holding companies out there. Most agencies that work with us are looking for something very specific and know we’re a trusted partner. They prioritize production quality over potential politics.

It was a big driver in our decision-making process. It’s amazing to be this close to somebody that invented the industrial advertising complex and now is trying to disrupt it in a really meaningful way.

Are clients concerned about the news that came out about him last year?

There’s such a prevailing sense of respect across the industry for him. I think a lot of people are very impressed by what he’s done for them or their company in the past. We haven’t seen any of those discussions come up.