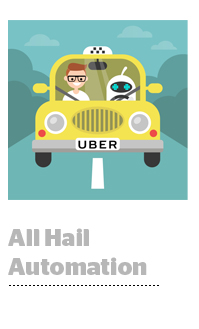 Uber has the pedal to the metal when it comes to paid social automation.

The ride-sharing app embeds performance marketing and paid social teams in every region where it does business. Four channel managers on each team make sure campaigns meet their objectives.

On Facebook and Instagram, where Uber spends a significant portion of its social budget, that means everything from awareness and consideration to acquisition and reengagement.

“We use Facebook as a full-funnel channel,” said Katie Heimerich, who leads Uber’s performance marketing team in North America.

But executing media on social is a “huge time suck” with a lot of manual work to run campaigns and do reporting, Heimerich said.

Creative is a particular challenge for Uber, which runs a lot of geo-based media targeting riders and drivers in specific locations. The same goes for promotions centered on Uber’s food delivery service, Uber Eats, and Uber Everything, the division that runs Uber Eats and its other delivery-related experiments.

Even though Uber works with agencies, maintains numerous tech partnerships – including with Celtra for rich media display – and has its own large in-house creative team, the company was forced to outsource a lot of its asset production.

“Everything we do includes localization or some dynamic element that requires us to create a bunch of assets,” Heimerich said. So her team started working with Facebook marketing partner Smartly.io in May to automate Facebook ad campaigns in the US. The two companies struck a global contract in March.

Smartly helps with budgeting, dynamic creative, campaign execution, reporting and optimization. For instance, Uber automated much of its social ad design work for Uber Eats and its rider and driver promotions.

Farming out the grunt work leaves more time for strategy, Heimerich said. The channel managers on her team used to spend at least half of their time on execution. These days, they spend the bulk of their time in planning meetings.

“We’ve obviously got tons of different digital campaigns happening at one time,” Heimerich said. “And it’s just way more valuable for our channel managers to spend more of their time strategizing than focusing on the execution.”

Ramping up ad volume and spend while maintaining performance is increasingly a job for the machines, said Tuomo Riekki, CTO and founder of Smartly.

“This is where automation and AI-fueled decisioning comes into play,” he said. “You can let the machines optimize for revenue or any of your determined KPIs to ensure that performance doesn’t drop once you turn on the volume.”