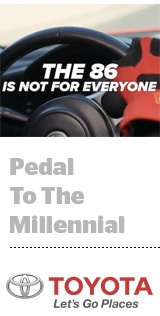 Toyota is putting video behind the wheel.

On Monday, Toyota, working with VaynerMedia, launched an online video-centric ad campaign to promote its 2017 Toyota 86 sports car to millennials – a generation more associated with Uber than car culture.

But millennials are still buying cars. People ages 21 to 38 bought around 4 million vehicles in the US in 2015 – second only to boomers, according to J.D. Power, which also found that millennials are least likely to be influenced by traditional marketing.

That’s especially true for the audience Toyota is looking to reach for the 86 model: single male millennial driving enthusiasts in the market for a car.

Online video is the right format to connect with that sort of buyer, said Nancy Inouye, national media manager at Toyota.

More than 92% of millennial internet users in the US – about 78 million – consume digital video, per eMarketer.

VaynerMedia is supercharging the targeting with Toyota’s CRM data, including previous owners and current customers with soon-to-expire leases. The companies also are building lookalike audiences using data collected via a microsite at toyota.com/86, where visitors can sign up for more info about the car.

YouTube and Snapchat are on the media plan to drive the initial awareness, said Matt Sitomer, VP and group account director at VaynerMedia, with Facebook and search “doing the heavy lifting in terms of driving traffic down funnel.”

But Snapchat is starting to appear more interesting to brands like Toyota.

As it “matures as a platform, particularly with its new ads API, [Snapchat] continues to become a powerful tool for digital marketers,” Inouye said. “It was a perfect fit in this case for reaching our millennial target and introducing them to the 86.”

And getting its new model onto people’s radar is a major KPI for Toyota. Awareness has been a bit of an issue for the brand in the past.

“This is a car that a lot of people haven’t heard of before,” Sitomer said. “The Scion also suffered from this.”

Toyota killed that youth-oriented brand last year after it didn’t gain traction with millennial buyers. The Toyota 86 now has a message focused more around exclusivity and performance.

Toyota is only planning on putting 8,600 of its 86 model vehicles on the market this year, a strategic move to promote the notion of scarcity and connoisseurship.

After monitoring the comments in online automotive forums and blogs, for example, the automaker noticed that fans of the now retired Scion lamented its passing with observations like, “The average driver didn’t appreciate this car.”

That perception led to the messaging in the new videos, which features a red Toyota 86 zipping around a track in high gear with the tagline, “It’s not for everyone – is it for you?”

It’s a message in lockstep with the media plan – creative and media that “work hand in hand to identify just the right drivers,” said John Myers, national manager of vehicle marketing for Toyota.

“Not everyone will appreciate what this car does well – and that’s OK,” Myers said. “We want to find the right match, the drivers who see their car as more than just a way to get from point A to point B.”