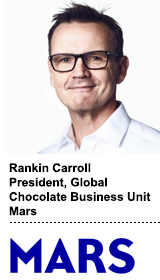 Most chocolate and candy bars are bought last minute on the way to the cash register, a difficult experience to recreate online, where there is no physical checkout.

Rankin Carroll, Global VP and CMO of Mars Chocolate, oversees a portfolio including Skittles, M&M’s and Snickers, and he must not only transform their business models as grocery shopping moves online, but recreate key purchase moments in a digital world.

“We’re doing experiments so we’re not hamstrung with bricks and mortar,” Carroll said.

Mars is also building up its arsenal of first-party data, both through direct-to-consumer (DTC) online plays and owned and operated retail stores, to serve more relevant offers to consumers.

The impulse buy of the future, for example, might be about serving someone an offer before they’re about to have a party, rather than trying to sell a single candy bar at the end of a generic purchase.

“Data informs experience,” Carroll said. “Wherever we’re collecting data, we’re trying to bring that back to the total experience of the brand.”

AdExchanger: How are you building up your first-party data set?

RANKIN CARROLL: DTC is a nascent business for us. Mars has been doing it in the Petcare business, so we’re learning from them. We have north of 30% growth online. There are the retail stores where we have people engaged with the brand, and they can purchase online.

Is the impulse buy dead in an online world?

Amazon is going to be able to deliver a lower value transaction in 10 minutes. Deliveroo brings people bubble tea for 4 pounds in London in 12 to 15 minutes. As technology evolves, the ability to deliver impulse becomes more economically feasible.

The reality is the low transaction value of a single item in my category probably has a way to go before that kicks in. But we have to be developing portfolios that make sense for [each] channel.

Mars was part of the group that recently launched a Global Alliance for Responsible Media. How would you rate industry progress around brand safety?

We had an issue in 2017 with YouTube where we pulled off. It was a tough decision, but it was the right decision. They worked hard to fix the problem and when we were satisfied they’d fixed it, we went back on.

We don’t want to be in a position where we’re behaving that way ad hoc. The Global Alliance for Responsible Media drives the conversation in a much more unified, consolidated way. It will lead to standards, action plans and a change in behavior.

What’s been the biggest change to your role over the past three years?

I’ve heard people talk about growth like it’s a new thing. Being accountable for growth as a CMO to me is not new. But the job of the CMO is changing. You’re a marketing officer, a digital officer, a CIO and growth officer.

There are three [types of] CMOs. There’s the CMO who represents the marketing function and does advertising in a traditional way. They’re not leading the growth conversation and they’re on their own convincing people it’s worth spending money. You have the CMO with good affiliations on the leadership team, maybe with the boss, who starts to lead the growth agenda.

Then you have CMOs who are driving the growth strategy of the business. They have a coalition across the leadership team. To get to that third model, you’ve got to be convincing that you’re using investments wisely. You need to protect your budget fiercely and ferociously.

Which CMO are you?

I’m trying to get to the third. I’m probably somewhere between second and third.

I understand the importance of the whole business, and I’ve learned just defending the marketing agenda is not a very effective way to lead. If you want to have a conversation about an online DTC portfolio, you better have a very good relationship with your supply head.