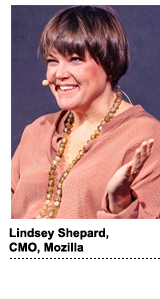 Although privacy and online advertising are often framed as mortal enemies – or at least mutually exclusive – it doesn’t have to be the case, says Lindsey Shepard, CMO of Mozilla, maker of the Firefox browser.

“The advertising ecosystem online is fundamentally broken right now – I believe that,” says Shepard (although, you can call her “Shep”).

But the future of online advertising will be bright if it’s more private and more transparent than what exists today, and if Google’s Chrome updates can serve as a catalyst for change, Shep says on this week’s episode of AdExchanger Talks. (To be fair, Firefox has blocked third-party cookies by default in Firefox since 2019, but Chrome has a lot more market share.)

“We’re sitting at this fork in the road with the end of third-party cookies,” Shep says. “We need to ask ourselves, ‘How do we build something better?’”

Because the alternative is to simply (or tortuously, as seems to be the case) recreate the same faulty system that exists today using different technologies, and what’s the point of that?

“Either we end up with something brand new that does the same thing or worse potentially, or we move towards a better model with more privacy built in,” she says.

With that mandate in mind, Mozilla, which makes its money from advertising, has been building and experimenting with privacy-preserving ad technologies, including its own ad network, and offering ad space in the news app Pocket, the Firefox News Tab and in Firefox Suggest, a new custom search feature available via Firefox’s URL bar.

“If we’re going to suggest changes and really advocate for big change in the ecosystem,” Shep says, “we have to participate in it and show what effective, non-creepy advertising really can look like.”

Also in this episode: Shep’s job before Mozilla as director of marketing for integrity at Facebook smack dab in the middle of the Cambridge Analytica scandal, why Mozilla is getting more involved at the W3C, and the most privacy-offensive, internet-connected products for sale this holiday season, according to Mozilla’s internal research. (Tip: Your NordicTrack Treadmill is probably spying on you.)