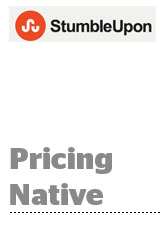 On Digiday, Josh Sternberg takes a look at StumbleUpon advertising and its “native” format.  He finds a creative pricing structure: “The most common pricing for advertisers on StumbleUpon is a flat fee of 10 cents per engagement of anything five seconds or more (anything less than five seconds, the advertiser doesn’t have to pay). For specific product or movie launches, there’s a premium of 25 cents per Stumble (the act of going from page to page via StumbleUpon), which gives advertisers increased priority to skip ahead in line.” Read more.

Ad trading platform Digilant (née Adnetik) decided it was time to talk “growth story” yesterday.  According to a press release, the company saw an “85 percent increase in revenue, a 41 percent increase in staff, and several new innovative products launched over the past 12 months.” Read it.

Data exchange and platform BlueKai and mobile ad network Jumptap are claiming a first-of-its-kind innovation.  From the release, “Jumptap is expanding its data offering by more than 14,000 data segments via combined Jumptap and BlueKai data partners. Segments include consumer purchase intent, past purchases, geographic and demographic data, interests, lifestyle, and automotive, among others.”  Read more – including how pixels are matched to mobile audience.

A Y-Combinator startup, LeanMarket (see the site), is positioning as a real-time bidding (RTB) buying platform for mobile according to Venture Beat. Where’s the differentiation?  The article says it has to do with transparency: “Advertisers can see exactly which apps their ads appear in and can monitoring their activity through real-time reports.”  Also, the company says no minimums and no contracts. Just step up and buy some. You decide.

Not surprisingly for privacy researchers at University of California (UC) Berkeley, each cookie count yields more cookies (or “trackers”!) than the last. Their latest tally shows a 23% increase in the number of third-party cookies dropped over six months. The most prevalent third party cookie dropper is a certain DMP. As AdAge notes, “BlueKai set the most cookies on the top 100 sites in October — 328 up from 321 in May… Bluekai also set the most cookies among the most popular 1,000 sites. However, in that category the number of cookies it dropped fell from 2,906 on May 17 to 2,562 on October 24.” Read more.

Akamai, the content delivery specialist, looked at traffic patterns for e-commerce on an hourly basis between Black Friday and its online version, Cyber Monday (a day largely spent at desks and computers, not malls). There wasn’t that much difference in activity. “The only clear difference is that consumers chose sleep over shopping as illustrated by the 25% decrease in browsing activities at 12AM,” said Akamai’s senior program marketing specialist Elyssa Duboys in a blog post. Read more.

On The Makegood, publishers’ biggest decision is to figure out who to bring to the consumer data “party” says Shelley Eleby, quadrantOne’s director of marketing and product strategy. After that, Eleby adds, “Just Dance. This is an opportunity to learn. This is not a point in time solution but an ongoing strategy that will continue to refine and ‘re-imagine’ itself as technological innovations advance, as users become more educated about the digital data trail they leave, and as publishers become more intuitive to deliver experiences that create value for consumers.” Read it.

Similarities between ad exchanges and financial exchanges may extend to their vulnerabilities, Jasper Jackson argues in a column on The Media Briefing. He looks at phenomena associated with High Frequency Trading (HFT) such as “Red Queen syndrome” and “flash crashes.” (Oh the imagery!) The stakes could be high for real-time bidding (RTB), Jackson writes. “HFT peaked in 2009, when it accounted for 61 percent of all US stock trades. It has since fallen back to 51 percent – and profits from HFT have fallen to a quarter of their 2009 levels.” More.