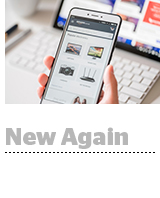 Amazon has lit a fuse under the staid discipline of search advertising. With paid placements commanding more real estate on Amazon’s results pages, organic listings have been pushed lower on the page. As Recode reports, this has led to escalating spend from brands. “To get that prime visibility, brands are responding with more cash,” Recode notes. But there’s a twist. “These ads not only help big companies maintain their leads, but can potentially help newer, lesser-known companies become visible — something that isn’t always the case in physical stores with finite shelf space.” More.

Despite Imran Khan’s key role in Snap’s IPO and its ad tech road map, most ad execs aren’t sorry to see him go. As a former Wall Street exec, Khan brought business acumen to match founder and CEO Evan Spiegel’s product expertise. But he didn’t bring advertising or media experience and has been largely “invisible” since the company went public, one anonymous ad exec told Business Insider. Others blame him for letting Snapchat launch an unpopular redesign that took the wind out of the sails for the company’s user growth. “Internally and externally, folks never thought Imran was a good fit in that strategy role,” says another anonymous ad exec. “It made a lot of sense for him to help get Snap to IPO, and considerably less sense after that.” More.

If there’s one thing Google needs, it’s another privacy investigation. The latest comes out of Arizona, where Attorney General Mark Brnovich initiated a probe of Google’s location data collection practices, The Washington Post reports. The move is a possible indication of how Republican criticism of anti-conservative bias is turning into a headache for US tech. Missouri Attorney General Josh Hawley, also a Republican, subpoenaed Google in July for an investigation into Google boosting its market share by pre-installing apps on Android devices (an antitrust charge for which Google was recently fined $5 billion in Europe). And the Justice Department is convening state attorneys later this month to pursue President Trump’s charge that search and social companies are “stifling the free exchange of ideas” by removing conservative voices. More.