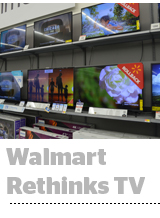 Google’s dominance in the buy-side ad-server market could be slipping. There are “literally dozens” of RFPs in the North American market right now as advertisers ponder the impact of Google’s GDPR compliance policies – which is to say, its promise to remove all ad server IDs, as it has in Europe, AdWeek reports. Indie ad servers like Thunder say they’re seeing a significant uptick in the number of inbounds they’re receiving in Europe. But unseating Google, or even getting close, won’t be easy (if it’s feasible at all). Ad servers will need to find alternative sources of revenue if they want to compete in the space, where profit margins are razor-thin. “All the money has to be made selling other services,” says Ramon Jimenez, an advisor to venture capital and private equity firms that invest in ad tech. “Just not being Google isn’t a really sustainable business model.” More.

The newest entrant in the original content wars isn’t who you’d expect. Walmart plans to fund at least six original programs next year for its streaming service, Vudu. The big-box retailer sells half of all television sets in the United States, but it hasn’t fought for a foothold in streaming media, even as online retailers like Amazon or Alibaba in China tout the connection between TV-style audiences and ecommerce. Walmart is getting involved now because it sees a real chance for shoppable smart-TV ads, so viewers can buy a product directly from their screen. Walmart is already pitching agencies for tens of millions of dollars of investments at this year’s upfronts, Bloomberg reports. More.

The Gray Lady And The Black Box

Targeted advertising is familiar to internet users, but how it works remains a mystery. The New York Times conducted an experiment where it picked 16 audience categories, including “registered Democrats” and “people trying to lose weight,” and ran campaigns to reverse-engineer how the ad-serving logic identifies potential targets. “We could do this because many companies, like retailers and credit card providers, sell customer information to data companies,” The Times reports. The campaigns, however, couldn’t run on Facebook – not because Facebook doesn’t enable the targeting, but because the ads alerted users to how they were being segmented, like “This ad thinks you’re trying to lose weight and still love bakeries” or “This ad thinks you’re male, actively consolidating your debt and are a high spender at luxury department stores.” Facebook bans ads that show users how they’re being targeted. More.