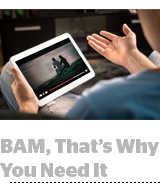 Best Of A BAM Lot

BAMTech, recently rebranded as Disney Streaming Service, gets knocked because Disney took a $469 million writedown on its investment early this year after spending billions to acquire a controlling interest. Yet there’s a lot of upside there. “Everyone loves to hate on BAMTech, but almost none of these critics have any experience building, operating and assessing streaming tech stacks,” tweets Matthew Ball, previously head of strategy at Amazon Studios and before that strategy director for Otter Media. Unlike content or ad tech that drive tangible revenue, BAMTech’s successes are easy to overlook. Maybe Disney did overspend, but it got the best video streaming tech on the market, Ball said. HBO’s stream of “Game of Thrones” crashed on Sunday, as did Hulu’s GoT stream, even though Hulu has a relatively low number of subscribers who log in to HBO through its app. And don’t forget when AT&T had to refund sponsors and advertisers earlier this year when its live stream of a golf match between Tiger Woods and Phil Mickelson crashed. “BAM doubtlessly accelerated Disney’s OTT launch times and will help it avoid crashes and other PR disasters in its first two years,” Ball tweeted. Check out the thread.

Think Outside The Box

Walmart and Kidbox, a company that delivers curated seasonal assortments of kids clothes, announced a partnership on Tuesday for exclusive Walmart clothing boxes. It’s a peculiar deal for Walmart, according to Retail Dive. The service is unlikely to generate much profit, since shoppers can return the whole box for free, leaving retailers on the hook for shipping and returns. But Walmart has revenue, and, in this case at least, it may be following other lures. For instance, Walmart wants to juice the number of brands it carries online. Its ecom group added 100 kids fashion brands in the past year. Kidbox has deals with 120 brands, including many upscale partners that Walmart craves to diversify its selection. Adding brands is also key for Walmart Media Group, the company’s data-driven advertising business, because it needs more buyers to create in-category scale and competition on the platform. Plus there’s the data on and targeting of new parents, perhaps the most lucrative audience segment for groceries and department stores out there. More.

Unlike Publicis and IPG, Omnicom, which reported earnings on Tuesday, does not plan to shell out billions for a data asset, said CEO John Wren. “Epsilon [doesn’t] have anything, from what I can observe, that’s unique or so proprietary that if necessary can’t be replicated.” Well then. Omnicom reported global revenue was down 4.4% from last year to $3.5 billion in its quarterly earnings on Tuesday. The agency holding company saw 2.5% organic growth, but overall revenue decreased due to unfavorable foreign exchange rates, said financial chief Phil Angelastro. “We’re through an awful lot of what we planned to do strategically, but we’re going to continue that process,” he said. Omnicom also talked about the recent reorgs and leadership changes it made to install programmatic and data-driven talent within the upper ranks of Omnicom Media Group, noting that Accuen was flat at $4 million as more clients access programmatic services through their agencies. Read the release.