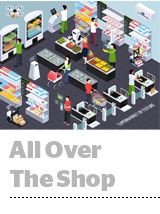 US retailers are upgrading their in-store tech to keeping the most transactions in brick-and-mortar locations, and head off Amazon’s growth. Apps or facial-recognition tech help people breeze through checkout. Interactive mirrors recommend outfits. Beacons and Bluetooth ping promos to phones and connect to mobile IDs. But retailers run different risks with data collection than ecommerce and social media companies. Some key committee members in the House and Senate have vowed to include brick-and-mortar retailers in a federal privacy law, The Wall Street Journal reports. But the bigger risk could be with consumers. “I have facial recognition for my iPhone but it makes more sense because it’s something personally for me, you know?” said one Sephora shopper. “But if a store is using my face, what else are they going to use it for? You don’t know.” More.

Amazon has become a bigger player in the streaming audio business with the launch of a free, ad supported music service. The ecommerce giant is reportedly offering to pay record labels per stream, regardless of how much ad revenue it makes, Billboard reports. Amazon previously offered a music streaming service, Prime Music, as part of its Prime bundle. The launch of a standalone ad supported option demonstrates Amazon’s growing power in the music market and puts it in direct competition with Spotify, which doesn’t have Amazon’s deep pockets for expensive licensing fees.  More.

AT&T has sold its 9.5% Hulu stake back to the streaming video company for $1.43 billion – valuing Hulu at $15 billion. In a statement, Hulu CEO Randy Freer said: “We thank AT&T for their support and investment over the past two years and look forward to collaboration in the future. WarnerMedia will remain a valued partner to Hulu for years to come as we offer customers the best of TV, live and on demand, all in one place.” AT&T will use the money from the transaction to reduce its debt, the release said. More.

Ad agency holding companies have their problems right now, but the industry overstates the threat of consultancies like Accenture and Deloitte, said Nigel Vaz, the new global CEO of Publicis Sapient. Vaz says the big consultancies are never in on key account pitches. “Because they don’t have the scale, the reach, the perception to do that,” he tells The Drum. “It is really interesting because their narrative would make you believe that Accenture Interactive is now the largest digital agency.” He says the challenge for agencies isn’t actually competitive. “It is actually the same challenge that our clients are having, which is consumer behaviour is basically making FMCGs, or auto companies, think about how to reduce cost.” More.