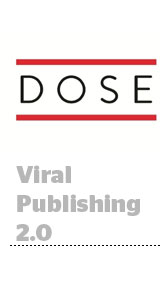 Not so long ago, Dose operated like a typical viral publisher, running tests to create the most clickable headlines and raking in revenue from banner ads.

But last year, Dose cut off all of its programmatic ads and bet its future on branded content. Dose founder Emerson Spartz shifted strategy because he says the viral bubble has bust. It’s too hard to get readers to click off-site these days.

“We realized that the perspective of maximizing page views was on the wrong side of history,” Spartz said. “Facebook and Google are less and less interested in sending traffic away from their own platforms. Our philosophy is that you have to win in the platforms themselves.”

The only way for publishers to make money on Facebook is through branded content, a practice Facebook legitimized in May 2016. Dose is offering up the technology it built to maximize page views to brands who want authentic instead of paid reach on Facebook.

Dose hired Aric Lapera from BuzzFeed in April to lead branded content strategy. Early clients included Sony, Universal and Netflix, which tapped Dose to create video content for its series about a teen suicide, “13 Reasons Why.”

“Brands want to be good storytellers,” Lapera said. “We’re using tech-driven data to understand what kind of content will work in social.”

To figure out what content will work in social media, Dose first tests content performance on a subset of users, tweaking if necessary. Once it lands on the right headline, image and content, it will unleash it onto a broader audience.

“Comedians test out a joke on friends, try the pacing, sequencing, timing and delivery at smaller comedy clubs. And eventually when it’s polished they drop it in Vegas for their Netflix special,” Spartz said, explaining how Dose’s tech works.

Savvy brands have picked up on another dynamic with branded content: Investing in ad creative can offer a meaningful ROI.

“On social, the price you pay for an ad is completely dependent on how good the media is,” Spartz said. “You don’t get 50% off a Super Bowl ad because your ad is twice as funny. But on social, that’s how it works.”

For the Netflix “13 Reasons Why” videos, Dose significantly overdelivered on its contracted views, Lapera said, reflecting how strongly the content resonated with the target audience.

Besides offering brands a better connection to potential customers with more powerful storytelling, Spartz wants to bring the measurement rigor that exists in direct marketing to brand advertising.

“We believe there is a revolution coming in the science at the top of the funnel,” he said.

Fueling the shift to branded content is Dose’s war chest, with $35 million in funding. The publisher last raised a $25 million Series B round in December 2015, from Tribune Media.

And Spartz says walking away from header bidding and programmatic and instead hosting the site on Medium, where it publishes content, will enable it to focus on serving brands.

“The two business models are somewhat incompatible,” Spartz said. “We either had a business focused on maximizing traffic and CPMs, or a business that’s focused on creating and distributing the best branded content for our clients.”