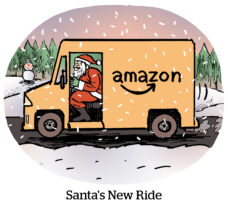 The deal makes sense. Web advertising isn’t dying, despite reports you may have heard. Then again, it’s also not in an impressive growth stage. Many publishers Outbrain works with are indexing more toward video and platforms, such as Rakuten TV, Pluto TV and Samsung TV Plus. These free, ad-supported video services have programmatic inventory that can be connected to ad IDs or contextual targeting data, Digiday reports.

Ad tech and digital marketing IPOs fared well this year, despite the ridiculous number of new bell-ringers. But Wall Street is a fickle lover, and the tide could will turn again. That’s partly why midsize companies like LiveRamp, DoubleVerify, Magnite, IAS, Tremor, Zeta Global and Criteo (to name just a few) have been avid acquirers. M&A is a way to capitalize on your cash on hand while simultaneously picking up a little more cred with investors.

Speaking of, CTV and ecommerce are two of the top categories investors want ad tech companies to move into. Shortly after Taboola went public this year, for instance, it acquired the ecommerce and affiliate marketing vendor Connexity for $800 million.

Take It As Flattery

Retailers, like Walmart, Target and Instacart, are copying Amazon’s advertising playbook nearly play for play. They’re imitating practically every Amazon platform feature, from second-price auction dynamics and pay-per-click ad units (when a commission per sale is intuitive) to focusing primarily on third-party sellers as opposed to consumer brands on the demand side.

Amazon dominates sponsored product ads and ecommerce search, so these minor online players (which are, to be fair, huge retailers in their own right) are mimicking Amazon’s rules because it’s the easiest and maybe the only way to gain advertiser buy-in. But there are opportunities to differentiate from Amazon’s ad platform.

For instance, online platforms self-attribute based on ecommerce sales so that, in the case of Instacart, its ads are attributed to Instacart sales. But brands want to know whether, say, someone who saw an in-store display for Harry’s razors at Target is more likely to acquire the product on Instacart.

It boils down to the question: Do people who default to a certain product for online grocery sales try a different brand while shopping in-store? If retailers “could crack that nut and be able to show in-store exposure and its impact online, and online exposure and its impact in-store, that would be a very powerful proposition for tackling Amazon,” Travis Johnson, CEO of ecommerce agency Podean, told Insider.

Companies with dial-in customer service numbers should be aware of how chatbots, which are now ubiquitous in service calls, end up infuriating a portion of the customer base. Overall, the evidence is clear that chatbots outperform human reps for customer service and even sales calls, The Wall Street Journal reports.

But one instance when chatbots tend to fail is when companies try to overly humanize the tech yet the robo-rep still reads as non-human. (Uncanny valley, anyone?) Research shows that angry customers balance out the relatively benign benefits of chatbots by flying off the handle when they have to deal with an AI rather than a human. An angry or upset caller who is given a chatbot to talk to is more likely to leave a low review or decide to no longer patronize the company.

It doesn’t take all that many extremely ticked off reviewers to scramble a seller’s or company’s online ratings and prospecting funnel, filling it with people who visit a product listing or app download page … and then promptly bounce after reading negative reviews.

Nielsen is rolling out individual commercial metrics, calling it a significant upgrade of the widely used C3 ratings. [Deadline]

Authentic Brands Group, whose portfolio includes Forever 21, Aeropostale, Brooks Brothers and Sports Illustrated magazine, is shelving its IPO with plans to sell a significant stake to PE firms at a $12.7 billion valuation. [CNBC]

Facebook: Three insights on the business opportunities of the metaverse. [blog]

By the end of 2021, CTV ad spending will have increased by 59.9% to $14.44 billion, and other fun facts about connected TV advertising. [eMarketer]