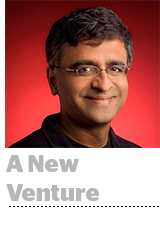 One of Google’s key ad executives is riding his horse off into the VC sunset, Forbes reports. SVP Ads and Commerce Sridhar Ramaswamy will depart the Googleplex for a role with Greylock Ventures. Sridhar helped Google’s ad platform business grow from $1.5 billion to $100 billion over a period of 15 years. “The thing I would highlight the most with what my team and I did at Google is we created a business where we were able to deliver both on being user-focused and delivering value to advertisers,” he said. More.

Twenty different media, ecommerce and agency businesses in Germany are teaming up to create a unified consumer login that will aggregate data privacy and consent settings across their collective properties. The group, which includes German media giants Proseibensat.1, RTL Group, Spiegel and GroupM Germany, are taking a proactive stance with the pending ePrivacy regulation, which threatens to limit third-party ad tracking in Europe. With 35 million people tied to its ID, the conglomerate is off to a good start. The hope is to expand across Europe to demonstrate the group’s value to audiences and to help members compete with the walled gardens, Digiday reports. But the cookie is under pressure from more than just regulation. “Long before the ePrivacy law will start, the browser industry will have killed the third-party cookie,” says Sven Bornemann, CEO of German online marketing association AGO. More.

The Road To $1 Billion

Pinterest is projected to clear $500 million in US advertising this year, a 44% increase from 2017, according to eMarketer’s first revenue forecast of the social media company. By 2020, Pinterest’s ad revenues are expected to cross the $1 billion mark. Pinterest generates an average revenue per user (ARPU) of $7.15, which it’s driving up with a video advertising network. Pinterest lags well behind Facebook’s ARPU of $134.89 or Instagram at $58.45 per user, but it shows the potential for Pinterest to gain ground, says eMarketer analyst Monica Peart. The image-sharing network is trapped on a similar plateau to Snapchat, which has an ARPU of $7.81, per eMarketer. Pinterest’s US audience is projected to reach 77.4 million this year and 83.6 million by 2020. “As it leverages its rich user data and develops its ad offerings and measurements, it has the potential to increase monetization levels to the likes of Instagram or Snapchat,” Peart says. More.

Google will pay Apple $9 billion this year and $12 billion in 2019 as part of its deal to remain the default search engine for the Safari browser, based on an estimate from Rod Hall, Goldman Sachs’ senior analyst for hardware and communications technologies. The only confirmed payment was in 2014 for $1 billion, so this is serious growth in four years. “We believe Apple is one of the biggest channels of traffic acquisition for Google,” Goldman told investors in the report. Alphabet has faced uneasy investors this year due to its fast-rising traffic acquisition costs, and Apple is clearly a big part of that. But Alphabet has been steadfast that even multibillion-dollar growth in traffic acquisition will pay off in the long run as Google boxes rivals out of incremental growth in the search market. Business Insider has more.

Invasion Of The Pod People

Podcast advertising might be a new revenue source for cash-strapped publishers, but there are challenges. Panelists at an Advertising Week session moderated by The New York Times’ global head of ad solutions, Seb Tomich, looked into the podcast tea leaves Monday. Nicholas Quah, founder of Hot Pod Media, anticipated podcasting would see a surge of “dumb money” from orgs that don’t know about the medium’s intimacy, which will artificially drive up competition. Meanwhile, many advertisers still don’t understand how podcasts speak to their audiences, said Laura Correnti, EVP at Media Giant Spoon: “Not enough brands, not enough marketers, not enough of the agencies know the hosts they’re integrating the brand messaging with.” But is it possible to scale intimacy so advertisers can hit the right tone while still getting the reach they need? “When you take Starbucks out of Seattle, you get Starbucks everywhere – but the quality gets lower,” Quah said.