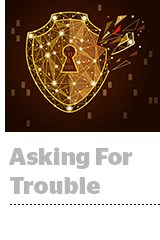 Facebook seems intent on helping DC beat a path to its doorstep. First, academic researchers from Northeastern and Princeton universities say Facebook has used two-factor authentication data for ad targeting without properly notifying users. In some cases, Facebook allegedly grabbed phone numbers without permission by accessing data pulled from a friend’s phone book. If that’s not awkward enough in a post-GDPR world, Facebook revealed a security breach on Friday that enabled hackers to gain access to the personal accounts of around 50 million users. The FBI and the Irish Data Protection Commission were both notified by Facebook. The slip-up could cost Facebook beaucoup bucks in Europe – a potential maximum fine of $1.63 billion if it’s found the company violated GDPR. Facebook claims to have patched the issue and there’s no evidence yet that any data was stolen or misused. On a conference call with journalists, Mark Zuckerberg trotted out the usual catchphrases: “This is a serious issue.” “We need to be more proactive.” Fine, but Kurt Wagner from Recode has a question: At this point, “Why should anybody trust Facebook with their personal data?”

The US Justice Department antitrust chief, Makan Delrahim, sounded like the EU’s active antitrust enforcer, Margrethe Vestager, during an Axios event last week. It was Delrahim who backed an unexpectedly aggressive challenge to AT&T’s acquisition of Time Warner, and he says there are “very valid concerns at some level” that Silicon Valley tech giants leverage their market power to stifle competition and innovation, The Washington Post reports. For now, he said, it’s hard to prove the antitrust allegations brought by competitors are more than “anecdotal stories.” Such proof would be necessary to build an economic case that the market consolidation harms consumers. “I don’t know if any of the enforcement bodies necessarily have that credible evidence,” Delrahim said. More.

SpotX is offering consultative services along with its video ad technology. “It’s not really a [new] product, it’s more of our sweet spot in terms of what we do,” agency development VP Jon Romano told AdExchanger. The rollout is part of a trend among programmatic vendors to provide advertisers with more flexible payment options, like ways to compensate vendors without cutting them in on a percent of media. “This allows us to have a pipeline where we can directly access [their inventory] from both the managed and programmatic service level,” Francois Lee, executive VP and investment director at Assembly, one agency using SpotX’s consulting service, told AdExchanger.