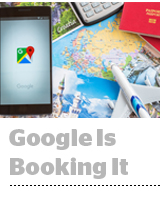 Google is making big moves in travel. Last week the search giant quietly announced a new standalone hotel-booking site, similar to Google Flights. With its own page, Google will do a lot less linking out to third-party booking services. Hotel companies may not mind, though, if Google can consolidate the number of intermediaries in the space. Google is also adding some new data as a carrot to hotel chains, like the kinds of keywords, reviews or searches for nearby landmarks that lead to bookings, Skift reports. “Meta-search fronted this development in the initial phase,” says Chetan Patel, VP of strategic marketing and ecommerce for Onyx Hospitality Group. “Now maps and content has become more prominent on search and on mobile.” More.

DirecTV Now, AT&T’s streaming bundle of live TV channels, is upping its price from $50 per month to $60, and it will add HBO to the package. Of all the media properties AT&T acquired with Time Warner, HBO has been the hero. AT&T has already bundled HBO into wireless subscriptions, and a WarnerMedia streaming service expected to launch this year will have HBO, TechCrunch reports. Aggressively leveraging HBO will probably generate antitrust complaints, but those might not stick considering DirecTV Now has been bleeding subscribers, losing a quarter-million in the second half of last year alone. Meanwhile, Hulu Live and YouTube TV, which offer linear television bundles starting at $40, are gaining subscribers. More.

Alexa, Where Are My Users?

Despite having 80,000 developer skills (Amazon’s term for voice apps) on its Echo platform, Amazon has yet to influence consumers to adopt voice beyond mundane tasks like setting timers and playing music. That’s made voice-based software difficult for developers to monetize. Many people compare the voice ecosystem to the early days of mobile apps, but both Apple and Google had “minted fortunes” for developers at this stage in their development, Bloomberg reports. It turns out getting people to change their habits from looking at a screen to conversing with a machine is proving more difficult than expected. And a lack of visual discovery is making it difficult for people to find third-party developer skills, let alone interact with them. “There are kind of a cluster of features people are coming to expect for voice: a daily news summary, weather, timers and a random fact,” says James Moar, an analyst at Juniper Research. “People aren’t really experimenting that much.” More.

TEGNA has its checkbook at the ready if any interesting acquisition opportunities crop up. “M&A is a very big part of our future strategy,” the local broadcaster’s president and CEO, Dave Lougee, told investors at the Deutsche Bank Securities 2019 Media, Internet and Telecom Conference on Monday. “We have enough scale today to do what we need to do, but we’re poised to be a good consolidator.” Lougee didn’t go into detail on what type of assets TEGNA could be in the market for, although he did say that TEGNA would consider making acquisitions “on the Premion side.” Premion is TEGNA’s OTT advertising division, for which Lougee said demand is on the upswing. “Inventory in OTT is growing by the hour.” But TEGNA isn’t in any rush. “We’re not in panic mode to do anything that doesn’t make sense,” he said. Comcast, on the other hand, is kicking the tires on potential ad tech acquisitions.