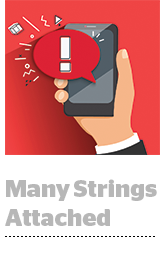 These Boots Were Made For Frauding

There’s nothing more creative than … a fraudster. White Ops recently uncovered a scheme involving a family of Android apps that trick people into downloading them with the promise of free stuff. Starting in late 2019, the apps began showing up in app stores with an enticing offer: Install the app, fill in your details, select a free pair of shoes (or some other freebie; everything from event tickets to pricy dental treatments were on offer, depending on the app) and, in two weeks’ time, the item would be mailed to your front door, no strings attached. But, obviously, there were strings. The apps were actually silently loading ads in the background of infected devices. The malware operation, which White Ops christened “TERRACOTTA” for some reason, infected more than 65,000 devices, spoofed more than 5,000 apps and was responsible for in excess of 2 billion bid requests. Read more.

Salesforce To Be Reckoned With

Shares of Salesforce shot up on Wednesday, the day after the company reported its fiscal Q2 earnings. Salesforce’s stock is up more than 67% year to date, CNBC reports. Revenue for the quarter was $5.15 billion, up 29% YoY, beating estimates. Marketing and Commerce Cloud revenue was $746 million, up from $616 million last year, and the company raised its full year guidance. Salesforce has been benefiting from enterprises accelerating their shift to digital during the pandemic, according to The Wall Street Journal. “There’s a broader imperative for digital transformation than there ever has been,” Bret Taylor, Salesforce’s president and COO, told investors earlier this week.

What counts as a “sale” of data under the California Consumer Privacy Act? Despite the fact that the CCPA has been in effect since January and enforceable since July, people in the ad industry still aren’t sure exactly how to answer that question. The California attorney general’s office is aware that ambiguity remains. “We do know there are still a lot of questions,” said Lisa Kim, a deputy AG in the privacy enforcement and protection unit of the consumer law section at the California DOJ. Kim was speaking at the AdMonsters virtual Publisher Forum on Wednesday. The challenge is that the definition of a sale under CCPA is extremely broad, and the AG’s implementation regulations, the final version of which was finally released in mid-August, don’t provide any further clarification on exactly what constitutes a sale. “Even though we had broad authority to make these regulations,” Kim said, “we were still bound by the CCPA and the actual language of the law.”