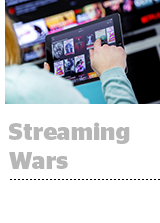 Is it game over for traditional media companies developing streaming services? BTIG’s managing director, Richard Greenfield, certainly thinks so. “We have come to the conclusion that it is simply too late for legacy media companies to try and compete in SVOD,” he writes. There are four reasons backing Greenfield’s point of view. First, legacy media companies haven’t acquired intelligently – for instance, Disney bought Fox, inheriting more content when it doesn’t need more content. Second, old-school media companies have moved too slowly, attempting to preserve their legacy businesses, and haven’t gone all-in with SVOD. Third, these media companies are devaluing their best franchises, like “Star Wars” or “Friends,” by putting them on their own distribution platforms, which have smaller audiences and where that content will get less reach. Finally, the SVOD platforms backed by tech companies – Netflix, Amazon, Apple, Google and Facebook – are getting bigger. Read more.

An Oxford University study of almost a third of apps in the Google Play store in 2017 found that the median app could transfer data to more than 10 third parties, and one-fifth worked with more than 20, reports the Financial Times. As of last year, 88% of all apps could transfer data to at least one company owned by Alphabet, and 43% could share data with a Facebook property. Twitter, Verizon, Microsoft and Amazon trail with between a fifth and a third of apps capable of transferring data, with a long tail of others in the low single digits. “Reuben Binns, the computer scientist who led the project, said that because most apps have now moved to a ‘freemium’ model, where they make revenues from advertising rather than sales, data sharing has spiralled out of control.” More.

WPP CEO Mark Read is mandating that its media agencies report any accounts over $20 million to the holding company so they can use sister companies to augment their pitch, The Wall Street Journal reports. WPP suffered a string of major account losses, including American Express, HSBC and United, and is trying to encourage collaboration between its agencies as marketers seek more integrated services. When asked about pitches on the company’s Q2 earnings call, Read said: “Often, there’s one company in the lead. But increasingly, it’s a number of different WPP companies.” But getting historically competitive agencies to play nice, even under the same parent company, isn’t a cultural shift that takes place overnight. More.