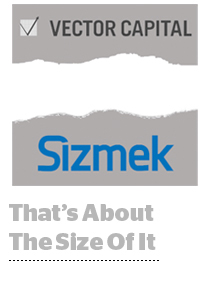 Less than two years after Vector Capital sealed its $122 million deal to acquire Sizmek, the private equity firm is already looking to divest.

Multiple sources with direct knowledge told AdExchanger that Vector has been shopping Sizmek, possibly as early as April, and just a year and a half after the deal closed.

Adobe is among those to kick the tires on Sizmek’s tech, possibly attracted by its ad server and dynamic creative capabilities, AdExchanger sources say. Adobe declined to comment on the rumor.

According to one source, Vector is hoping to unload Sizmek entirely but would consider selling it in parts if that’s the only way to do a deal. Sizmek has a multitude of assets, and it’s not clear which are adding or detracting value. Consider that Acxiom showed the most value when its LiveRamp business was disconnected from its Marketing Solutions division.

And Sizmek is very much a frankenstack, capped off by Sizmek’s acquisition of Rocket Fuel in July 2017.

Vector supplied Sizmek, which claims to be profitable, with the resources to take Rocket Fuel off the public market for $125.5 million in cash, with plans to couple Sizmek’s ad server and rich-media infrastructure with Rocket Fuel’s demand-side and data management platforms.

A few months later, Sizmek sunsetted the Rocket Fuel brand and integrated its DSP and DMP into a single demand-side stack under the Sizmek name.

The combined company was meant to create what Sizmek CEO Mark Grether described in an October interview with AdExchanger as a “data and AI-powered decisioning layer sitting on top of the entirety of the media plan.”

But Rocket Fuel was long reliant on IO-based media services to pay the bills, despite recent attempts to grow its platform solutions business.

And when the company became a part of Vector through the Sizmek acquisition, PE likely did what PE does best: It loaded Rocket Fuel with debt and cut services to try and optimize profits. Without service fees to rely on, revenue plummeted, leading Vector to lose faith in its investment thesis.

Yet independent ad servers are having a moment, thanks to recent business decisions by Google.

In late April, Google, citing privacy concerns, said it would no longer share user IDs outside of its own ad server. Bye-bye, independent attribution on Google’s platform. But ad servers, Sizmek among them, sniff opportunity in Google’s move as agencies and advertisers consider alternative tracking solutions.

Perhaps a company like Adobe or Oracle might be keen to grab Sizmek to shore up its analytics offering.

Whatever Sizmek’s next chapter holds or where its next home is, with or without Rocket Fuel, it’s been quite the journey for the nearly 20-year-old company. Sizmek is the poster child for ad tech rollups.

Sizmek started life as a rich-media ad server called Eyeblaster in 1999. In 2010, Eyeblaster rebranded to MediaMind and started focusing on ad delivery and dynamic creative. Content management and distribution platform DG acquired MediaMind the following year and combined it with its broadband distribution network Unicast.

Finally, Sizmek got scooped up by Vector in 2016 before grabbing Rocket Fuel last July.