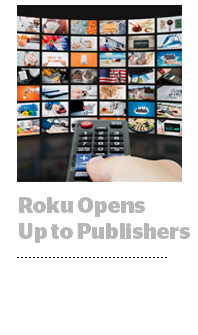 Roku released its Audience Marketplace on Tuesday, designed to let publishers use its first-party data based on how consumers interact with the OTT device.

The new marketplace allows publishers to match their audiences with Roku's. The device's first-party data also provides behavioral insights – such as what content Roku users search for or how much time they spend streaming content – that allow publishers to sell their inventory based on a deeper understanding of the consumer.

Turner, Fox and Viacom are the first publishers to sign on.

“Historically, we sold using show mix from an OTT perspective,” Noah Levine, SVP of advertising data and technology solutions at Fox, told reporters at a press briefing. “There have been challenges developing a sense of identity on OTT. The reason you need a source of identity is so you can activate data.”

While Roku’s marketplace isn’t a singular solution to the challenges of buying inventory on connected TV, Levine said it’s a step forward.

“What Roku has done here is probably one of the first steps needed to be able to do programmatic on connected TV in a meaningful way because, guess what, there’s no cookies on connected TV,” he told reporters.

Roku hopes the marketplace will ultimately serve its viewers, too. If publishers can run more relevant ads, the viewer is more likely to engage with them. Roku doesn’t sell all the inventory on its platform. Instead, advertisers can buy inventory from one of the company’s partners, such as Fox, Turner or Viacom. So it doesn’t hurt Roku now that it can monetize inventory it doesn’t itself sell.

Less waste is more engagement, or so the ancient marketing adage goes.