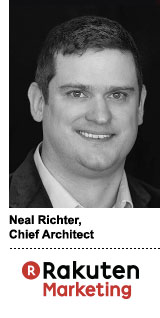 Neal Richter will present on the state of Ads.cert at AdExchanger's upcoming Programmatic IO New York conference on Oct. 15-16.

Programmatic auctions are growing up and cleaning up. Improvements to programmatic technology are a critical part of that transformation.

Ads.txt, rolled out last year, allows buyers to verify that they’re buying the inventory they think they are – like a consumer no longer fooled by counterfeit Rolexes. Ads.cert takes verification a step further, using a cryptographic signature in the bid request, like a certificate validating a real Rolex. The move cuts out hawkers of fake inventory.

While Ads.txt and Ads.cert help marketers buy impressions that will reach real users in the places where they’re consuming content, they don’t help make the auctions fair.

Neal Richter, chief architect of the Rakuten Marketing Platform, co-chair of the openRTB committee for the IAB Tech Lab, as well as the winner of its service excellence award, talked to AdExchanger about the role technology plays in programmatic’s growing up process.

AdExchanger: How do programmatic auction mechanics need to change?

NEAL RICHTER: OpenRTB creates a well-described protocol for bid request and response. What’s missing is a rigorous definition of how the auction works. In the beginning, that was straightforward. Then private marketplaces were added, and header bidding came in, and first-price auctions, and you have wrapper timing and bid caching.

There needs to be well-defined auction rules with some guardrails for innovation. Other markets, like real estate, have guidelines on how to do a multi-participant auction – how to accept a bid, the terms and conditions – and I think we are missing that.

Are first-price auctions here to stay?

How could guidelines around auction transparency be created?

If you look at questions that came up with [Google’s] enhanced dynamic allocation, there were a lot of broad opinions on how that was working, and documentation wasn’t always as clear as it could be. If marketers are going to have an extreme amount of trust, and the open market is going to have a place in media plans, [auction mechanics] do need to be more well-described. Prebid.org’s code of conduct is a start.

Can a code of conduct, like the one in Prebid, ensure auction mechanics are transparent?

Prebid is a piece of open-source code that defines how the header auction works, and multiple parties can inspect it. A lot of its code of conduct has to do with the fact that if you are going to use the software, you have to use it as designed and not to make alterations to give one participant an advantage over another and put the thumb on the scale.

A marketer values an impression the most. Ads.cert is a mechanism to sign an event. We’re starting with bid requests, yet the impression event doesn’t have a lot of natural security right now. If we move to signed impressions, advertisers will only be charged if the ad landed in the place they intended.

Are there any other murky parts of the programmatic auction that marketers should be aware of?

You have all this third-party data in an ecosystem with an unknown provenance. It becomes a data science problem to figure out how predictive it is, and you rely on the brand of the data you are using. Transparency into data sources, provenance and efficacy of data needs work. At Rakuten Marketing, we are about helping advertisers find shoppers, and that’s our value proposition. One of the things we care about is having a high efficacy of the users we target.

Does Ads.cert use blockchain? What role does blockchain play in bringing transparency to programmatic?

Ads.cert is built on a mechanism for cryptography that is also used on blockchain, so they have some technology in common.

In general, I have not seen that many solid use cases for how blockchain can be used to increase transparency in real-time bidding. The community of CTOs has looked at the technology and had questions for how it will scale for a real-time bidding approach handling a hundred billion events a day.

Where do you think programmatic is on its “growing up” journey?

Private marketplaces are continuing to grow. Two parties enter into a deal, and using the backbone of programmatic to get it done, but sidestep all these transparency questions. I think private marketplaces continue to increase. Where inventory or audience is scarce, the open auction isn’t the best mechanism.

The big place where programmatic will grow up is video. As humans, we are using our phones to consume video content and singing up for streaming services, and that naturally lends itself to programmatic advertising to show a more targeted ad. I think that’s the next phase. We need to duplicate a lot of those [programmatic] mechanisms, and make the Wild Wild West stuff that happened in display not happen in TV.