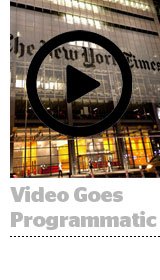 The New York Times has added a new sales channel for its video inventory: programmatic.

At the beginning of February, the Times opened its video inventory for the first time to programmatic buyers. Those buyers can access desktop and mobile web ad space, with mobile in-app to come.

The move was in response to requests from advertisers, who increasingly prefer to transact programmatically. But those buyers will need to talk to a salesperson first – such as Sara Badler, the publisher’s director of programmatic advertising.

“We are trying to listen to what our marketers want,” Badler said.

More advertisers and agencies want to control their buys from a central DSP, she said, which then becomes their data hub. And others are warming up to the idea of “audience guaranteed,” which allows brands to reserve the audiences they want in advance instead of bidding on them in real time.

Indeed, since the Times’ video supply often sells out, its sellers advise buyers to do a programmatic reserved buy for high-demand periods like Q4. They charge similar CPMs for video inventory regardless of whether a deal transacts programmatically or via a direct deal. Video’s supply constraints mean that many publishers see similar or higher CPMs from programmatic compared to direct-sold deals.

A small portion of the video inventory will go into the open marketplace, but it won’t be identified as The New York Times.

Anyone who claims to offer New York Times inventory on the open exchange is probably selling something else, said Rachael Savage, VP of ad ops and platform strategy,

“Our video inventory is at a premium. As programmatic grows, it’s important to keep the transaction really clean,” she said.

Adding programmatic video won’t change the Times’ overall strategy, because it views programmatic primarily as an alternative to an insertion order.

“We are thinking about programmatic as a means of transaction, not necessarily as a way to differentiate the inventory,” Savage said.

That said, the Times pushes its technology partners to figure out how it can help the publication deliver a premium ad experience programmatically across new formats like native or high-impact display.

“Whatever we build or sell, we want something we can do direct and programmatically in a seamless way,” Savage said.