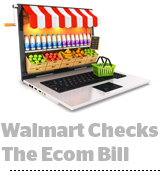 Walmart’s big move into ecommerce, starting three years ago with its $3.3 billion deal for Jet.com, has been an overall success. It’s online sales grew by 40% last year, and an online grocery pick-up service is one of the fastest-growing elements of the business. But even if Walmart is making progress, it may not be catching up with Amazon, Vox reports. Amazon is now profitable, and is ratcheting up its profitability across its business empires. Marc Lore, the founder and CEO of Jet who now leads Walmart ecommerce, is considering selling off one or more of the online retailers Walmart acquired since he was hired, including Bonobos and ModCloth. Lore has reportedly been told he’s cut off from buying more digital-native brands, and is instead being tasked with driving more revenue to the core Walmart business. More.

It’s no secret that advertisers are bringing marketing capabilities in house. Forrester and the In-House Agency Forum found 64% of advertisers polled in a survey have an in-house agency, up from 42% a decade ago. But today, cost and speed aren’t the only factors driving the trend, The Wall Street Journal reports. More than 25% of respondents said in-housing gives them an advantage in having knowledge of the brand, while 20% cited knowledge of the business as a plus. A decade ago, advertisers brought agencies in house in response to the recession. Today, it’s about the knowledge and integration needed to run a cohesive digital campaign, said Marta Stiglin, founder of the In-House Agency Forum. In-house agencies are also cheaper and more incentivized to drive toward business results. “I’m salaried and bonused based on the success of work I’m actually doing for the business,” said Roger Hyde, who heads up AT&T’s in-house agency. “That’s a very hard thing to swap in the external agency world.” More.

The United Kingdom is investigating TikTok over how it handles the personal data of its underage users and whether child safety is a priority to the rising social network, The Guardian reports. The United Kingdom has concerns about TikTok’s transparency tools, its open messaging system and the type of videos posted and shared by children on the network, and claims the app may be in violation of GDPR by not providing special services and protections for children. The investigation was prompted by a similar probe in the United States in February, in which TikTok parent company ByteDance was fined a record $5.7 million by the FTC for violating COPPA. “We do have an active investigation into TikTok right now, so watch this space,” said UK Information Commissioner Elizabeth Denham. More.

Netflix has many hit shows, but the success of “Stranger Things” reveals how aggressively the streaming service will pursue marketing and merchandising revenue. Netflix had Burger King, Kellogg’s and Coca-Cola tie-ins leading up to the July 4th release, a fashion line at H&M and a whole section of merchandise at Target. Netflix’s problem is that most of its “Originals” content isn’t actually owned by the company. Even exclusive programs like “House of Cards,” “Orange Is the New Black” and “Ozark” aren’t owned by Netflix, but licensed from outside studios, CNBC reports. Six of the top 20 shows on Netflix are Originals, but only one, “The Ranch,” is owned by Netflix. Even if Netflix has a huge head start in streaming subscriptions, its dismissal of advertising puts a lot of pressure on brand partnerships and merchandise to diversify revenue. More.