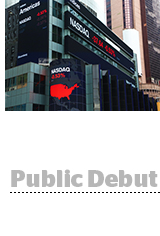 Opera, The Other Operator

The Norwegian software company Opera, maker of eponymous web browsers and mobile apps, IPO’d on the Nasdaq stock exchange last Friday, raising about $115 million. Opera has a 2% sliver of the global browser market but hopes to grow along with markets in sub-Saharan Africa and Asia, where it has a loyal base, Business Insider reports. The company is profitable – about $6 million in net income in the past year on $129 in revenue. Thirteen percent of Opera’s business comes from licensing search traffic to Yandex in Russia and 43% comes from Google, which is the default search provider for the rest of its user base. Opera’s advertising for its own news app and web browsers has grown 72% year over year. More.

Amazon’s fake seller problem is getting worse as fraudulent merchants gain sophistication. In China, more click farms and shady operations that promise money for fake reviews are flooding the platform and helping sellers boost their visibility on Amazon search. Some merchants and Amazon vendors now offer cash incentives for positive reviews. Others co-opt popular product listings to sell new (and unreviewed) merchandise, reports The Wall Street Journal. The rewards for performance on Amazon are huge and the risks of fraud are negligible, so scam services have grown bolder, said Chris McCabe, an ecommerce consultant who formerly worked at Amazon as an investigator. Some tactics, like leaving obviously fake five-star reviews or buying a product and then leaving a safety complaint, are used to get a rival suspended briefly – or sometimes not so briefly – until the seller gets Amazon to respond to a complaint. More.

Snapchat has often seemed to disregard its influencer community, but that may be changing. The platform is trying to overcome the gap between its influencers and marketers with a “Snapchat Storytellers” pilot program that brings popular account creators together with brands and agencies. Snap is still playing catch-up with Google and Facebook on this front, but “[i]f creators can help brands make great-looking ads that perform well, those businesses will be more likely to spend a lot more on Snapchat,” writes TechCrunch. More.