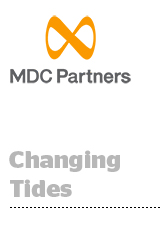 MDC Partners has cut five employees from its leadership team. The firm declined to break out which roles were affected. “As we look to the future and refine the structure of our organization to best support our clients and agency partners, we made the difficult decision to part ways with a small handful of individuals within our corporate team,” a company spokesperson told Ad Age. The holding company has been struggling recently, with CEO Scott Kauffman calling the firm’s first-quarter results “disappointing” after reporting a 6.2% drop in revenue due to client cutbacks. “We share your frustration with our financial results,” Kauffman said on a May earnings call. “We need to do better.” More.

It’s been a crummy week for Sinclair and Tribune Media. First the FCC sought to block Sinclair’s attempt to buy Tribune. And now, because of evidence uncovered during the government review, Sinclair and Tribune are under investigation by the Department of Justice. “The probe has examined whether Sinclair Broadcast Group Inc., Tribune Media Co. and other independent TV station owners coordinated efforts when their ad sales teams communicated with each other about their performance, potentially leading to higher rates for TV commercials,” according to Wall Street Journal sources. Read more.

Agencies need to lean in to performance metrics and results-based contracts with clients, according to Dentsu Aegis Network CEO Nick Brien. “There’s no reason why the economics of our model and our compensation deals cannot be structured to those kind of outputs,” he told Digiday. There’s a misalignment of incentives when brands make agencies compete on rock-bottom pricing, since those deals are best met with little to no services or interest in business results. Brien said advertising shouldn’t just be measured against brand awareness and customer acquisition, but with metrics like churn, loyalty, retention or brand advocacy. “A lot of people talk about digital disruption and transformation but the biggest competitive advantage brands will have today is integration.” More.

What is the ad industry to make of the fact that S4 Capital, the shell company Martin Sorrell plans to develop into a new agency holding company following his ouster from WPP, made the creative production company MediaMonks its splashy first asset? “Over and over again it seems that what we hear from brands and this has gone on for years is they want to get rid of the middleman and work more directly with the makers (of content),” Dustin Callif, managing partner of the production agency Tool of North America, tells Adweek. The deal “marks a point in time when production has been more strategically placed at the center of advertising,” said James Morris, CEO of the creative and advertising network Stink Group. More (with subscription).