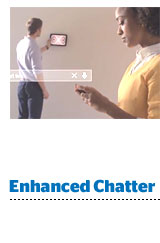 On The New York Times’s Bits blog, Claire Cain Miller tackles both sides of the recent mobile ad standardization changes by Google through AdWords – known as enhanced campaigns.  After noting Google’s reasoning for the changes, she echoes the concerns of buyers, “Some advertisers (…) say they do not want to lose their fine-grained control over their ad campaigns and cede that control to Google. For example, iPad users generally spend more on e-commerce sites than users of other kinds of tablets, so many retailers showed ads only to iPad users, but now they will lose that option.” Read more. Given the clear difference in mobile use cases with tablets versus smartphones, it would be hard to imagine Google will stick with that particular decision.

Last Thursday, retargeting and customer data platform firm TellApart received some air time on CNBC’s “Fast Money” show which looked at opportunities in “big data and marketing.”  See it (starts at 20:00).   The piece is very basic in its coverage – apparently, many people still don’t read AdExchanger – and the show’s hosts make note of retargeting’s “creepy” factor.  Nevertheless, Wall Street investors have their eyes on the space and are looking for ways to “play” it. LinkedIn and Amazon were mentioned.

Brash young hollywood and younghollwood.com publisher R.J. Williams tells Ad Age that traditional display just wasn’t doing the trick for his site. And so, he made even bigger display ads – native ads!  Williams says, “We don’t feel it’s as effective or efficient as being embedded in the content, the product integration, the experiential, the social. There are so many other elements that are more effective than doing a traditional media buy.” Read more.

Automotive remains a clear opportunity in the retargeting and real-time bidding milieus.  Cobalt delivers its marketing message in a brochure piece as its vertical “Cobalt Premium Network” and Google Display network provide an inventory pool to auto clients.  Touting dynamic creative, it’s unclear if the underlying tech is Cobalt’s.  See more.  Regardless, specializing in verticals is another way to address audience. (Adify forever!) Note: ADP bought Cobalt for $400 million in 2010. ADP could be another company in strategic acquisition mode.

You don’t hear much about the performance of holding company Dentsu compared to the other large agency holding companies, but Dentsu’s quarterly earnings release can provide a small window.  MediaPost’s Steve McClellan notes the 6% increase in revenues that were slightly below analyst expectations.  Also, the closing of the acquisition of holding company Aegis may be done by the end of February.  Read it.

Even after years of accolades for Yandex, it’s still somewhat shocking to see the Russian search company surge against Google and Bing. The company knocked Bing out of #4 slot on comScore’s global search rankings chart. SearchEngineWatch. And MarketWatch’s John Dvorak likes to use it: “Although it targets the Russian market it shows up in English if you are coming in from the U.S. and seems to produce excellent results on every search. I prefer the layout of the results when compared to Google and Bing. It’s a bit more straightforward with an appealing layout and, at least for now, not noticeable advertising.” More.