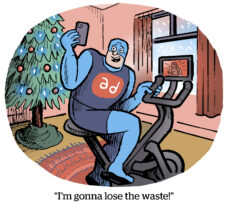 But the rollout is less random than it seems. According to Volta, a retail media play was always part of its plan. “The biggest economic opportunity isn’t in conquesting fueling dollars; it’s in unlocking the spend that will accompany the behavior shift around fueling habits,” Volta CMO (and ad tech tech) Nadya Kohl said in the release.

Volta’s particular selling point is that the adoption of electric vehicles – and therefore the need to charge them –  will accompany a dramatic realignment of convenience store shopper budgets, because people won’t be gassing up when the tank is low. They’ll be more likely to charge in places where they already go, like offices, groceries and big-box stores.

Volta will also be chasing the travel and entertainment companies that often place signage around gas stations as a way to capture trapped eyeballs. “Volta is reinventing retail media by fusing high-impact digital displays with EV charging, connecting brands to the most powerful audience movement in a generation,” Kohl said.

In 2018, a Georgetown University research study found Amazon was the second most trusted institution in the US, trailing only the military. But public trust is fragile, and the company has failed to maintain privacy and security measures for its sprawling empire of consumer data.

According to internal documents, Amazon’s “metastasizing record of what you search for, what you buy, what shows you watch, what pills you take, what you say to Alexa and who’s at your front door – had become so sprawling, fragmented and promiscuously shared within the company that the security division couldn’t even map all of it, much less adequately defend its borders,” Wired reports.

This isn’t the first time Amazon’s been dinged over privacy concerns. Over the summer, it was hit with an $883 million GDPR fine – more than twice all other GDPR fines put together. Even so, thus far Amazon hasn’t suffered in terms of trustworthiness in the public image, at least not as much as Facebook, Google and YouTube have.

“Who do Americans trust more than Amazon to do the right thing?” Bezos said during his congressional testimony last year. “Only their doctors and the military.” But he added: “Customer trust is hard to win and easy to lose.” Add that bit of wisdom to your cart.

New York State Attorney General Letitia James is leading a group of attorneys general from other states in an investigation of the company formerly known as Facebook. “Doesn’t make a difference if you call it Instagram, Facebook or Meta, the fact still remains the same: These social media platforms are extremely dangerous and have been proven to cause both physical and mental harm in young people,” James said in a statement.

The case targets Facebook’s promotion of both its main app and of Instagram, and the company’s effort to extend the time spent on those apps by teens and young kids despite internal reports citing a correlation between time spent and physical and mental health problems.

In other news, while the AG drama unfolds, Facebook is adding tools for advertisers to avoid content that isn’t brand safe in the news feed. Advertisers have been clamoring for more controls there. Marketers now will be able to deselect news and politics, social issues and crime and tragedy, and avoid users who recently engaged with any related content on the platform.

How cellphone data collected for advertising landed at US government agencies. [WSJ]

There’s a new piece of EU tech regulation that’s nearing passage – and Google is ramping its lobbying in response. [FT]

A useful thread on Invalid Traffic (IVT) in the ad world. [tweet]