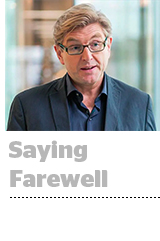 Unilever CMO Keith Weed will retire next May, the company said Thursday. Weed has been at Unilever for more than 35 years, and held the top marketing and communications position since 2010. News of Weed’s departure comes shortly after Unilever named Alan Jope, the marketer who currently helms the company’s beauty and personal care division, as the successor to CEO Paul Polman, who is set to retire at the end of the year. “I am moving onto another chapter,” Weed tells The Wall Street Journal. But he’s not closing the book. “The biggest challenge we have is that we need to rebuild trust in advertising,” he said. “These issues are all solvable.” More.

Some of the best-known independent ad tech companies are undergoing layoffs amidst a general belt-tightening period. MediaMath trimmed its product and engineering teams this week, Adweek reports. And OpenX recently reduced product headcount and closed its office in Santa Clara, California. These reductions may reflect a more measured approach to growth and an interest in demonstrating profitability. “There’s three things driving M&A in the space: scale, synergies and profitability,” said Jay MacDonald, managing partner of the investment bank Digital Capital Advisors. “We’re at a time in the market when everybody is for sale for the right price and if you’re not profitable you’ll get to a place where investors tell you to go and find a home [by way of a fire-sale].” More.

Cable networks are collaborating in new ways as their direct rivalries fade and Google, Facebook and Amazon encroach on their ad budgets. “Probably the most exciting thing happening with VOD is the national network groups making it addressable by the deals they have with the [cable operators] for that inventory,” Mike Piner, SVP of video and data-driven investments at MullenLowe’s Mediahub, tells Digiday. Some of those deals come through mergers, such as the combination of Comcast and NBCUniversal. But joint ventures are also hot. Canoe Ventures and NCC Media, a TV ad sales business trying to provide cable companies with addressable inventory, are both jointly operated by Comcast, Cox and Charter. More.