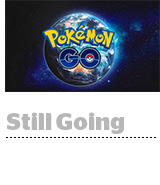 The waves of fans and news coverage that accompanied the launch of “Pokémon Go” in 2016 have receded, but the app is proving the immense revenue staying power of a hit mobile game. “Pokémon Go”’s revenue in November reached $80 million, up from $32 million in November last year, reports Pocket Gamer. And the “Pokémon Go” game developer, Niantic Labs, is preparing to launch player-to-player duels, which could boost gameplay even more. In 2017, sale of the top mobile game apps slightly outpaced the sales of the top studio films. But it was probably the last year when comparing those two categories would even be close, as the growth and durability of in-app revenue propels mobile game earnings past blockbuster movies. More.

The consulting giant Accenture is one of three finalists to buy the agency holding company MDC Partners, according to Adweek. “The deal would also be in keeping with Accenture’s increasing moves into the creative marketing space via its Accenture Interactive division,” writes Patrick Coffee. While Adweek indicates the deal is for the entirety of MDC, consultancies can be ruthless when it comes to cutting costs, and many MDC agencies have tried to buy themselves back, only to be rejected by the board. It’s an uncertain time in agency land these days, as consultancies try to become agencies, agencies try to become consultancies, and veteran ad execs like Martin Sorrell try to upend the entire paradigm. More.

The privacy-centric browser Brave is calling for a wide-ranging probe into the digital advertising industry, Bloomberg reports. In a letter to EU commissioner Margrethe Vestager, Brave founder Brendan Eich asked authorities to specifically look into how digital ad giants collect data that isn’t related to advertising and then use it to target ads, which makes it difficult for publishers to compete. He also asked the commission to look into how publishers are forced to sell ads through dominant platforms that “turn the inventory into a commodity and keep most of the revenue.” While that complaint targets Google, Facebook and Amazon, the commission may have trouble probing ad tech in general, which is crowded and fragmented. The “sector inquiry,” should it happen, will likely take time; the EU began probing the ecommerce industry in 2015 and didn’t release a report until two years later. More.

Wunder About This Shakeup

After a brief stint as CMO of the SaaS startup Domo, veteran ad exec Shane Atchison is returning to the agency world, stepping in as North America CEO of newly-merged Wunderman Thompson. Wunderman’s current North America CEO Seth Solomons will move into “another” role at WPP, according to The Wall Street Journal. Could WPP CEO Mark Read be gearing up to move his former Wunderman coworkers into higher level holding company positions? That’s only speculation, but it’s possible. It’s worth noting that Atchison and Read also worked closely – when the former was CEO of Wunderman subsidiary Possible Worldwide. Read more (not a pun).