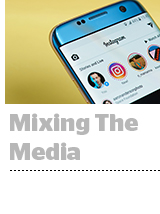 Let Me Be Direct

Direct-to-consumer brands that have built their businesses on Facebook and Instagram are expanding away from the platforms, Digiday reports. Take Glossier, a heavy Instagram advertiser that’s now building a direct consumer messaging tool, or Greats, a startup shoe manufacturer that has embraced direct mail. As Facebook inventory rates go up and third-party data usage declines, Facebook becomes less useful for smaller, hyper-targeted brands. “Facebook is still powerful in terms of lift and reach; that hasn’t gone away,” says John Povey, SVP of marketing and analytics at the agency A4 Media. “But what these brands should be focusing on is direct engagement. So what we’re seeing is brands are taking a step back to think about how they should allocate their budgets in a way so that they have a differentiated mix that’s well-rounded.” More.

Think Outside The Big-Box

New Snapchat research on big-box store shoppers in the United States includes a few potentially useful nuggets for retailers and product brands targeting younger mobile audiences. For instance, the middle of the month, from the 11th to 20th, is the period when Snapchatters are most likely to be shopping at big brick-and-mortars. Check out the blog post. There’s also a consistent pattern with shoppers beginning with food and “recreational” shopping (think sports or toy stores) and closing out a trip with something in self care or wellness, such as a nail salon or yoga studio. “It’s really about developing and understanding the affinities outside of your store,” Amy Moussavi, Snapchat’s global consumer insights lead, tells Adweek. More.

The Chicago Sun-Times will unveil a site redesign early next year using Chorus, the publishing software platform developed by Vox Media, and will also sell media via the Vox advertising marketplace Concert. Chorus powers Vox’s seven editorial brands, including SB Nation, Eater and Recode, and outside publishers The Ringer and Funny or Die. But this will be the first newspaper company to license the Chorus and Concert products. “It’s going to be cleaner, it’s going to be less clutter, it’s going to be less pop-ups,” says Sun-Times CEO Edwin Eisendrath. More.