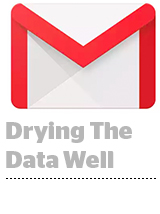 Google is cracking down on the amount of data it shares with Gmail app developers to avoid another privacy problem for the email product. Apps that don’t offer email or productivity services will be cut off from any Gmail data, while other developers will be unable to sell the data they collect or use it for targeted advertising, The Wall Street Journal reports. Those apps that can still collect data will undergo mandatory security assessments that can cost up to $75,000. The move threatens to kill off hundreds of developers reliant on Gmail data that they sell to advertisers. Google’s prophylactic measures to prevent another privacy debacle threaten to stifle innovation, said Kevin Bankston, a lawyer and director of the nonprofit Open Technology Institute. “My concern is that there is going to be an overcorrection, where we end up making it harder for users to leverage their data that is stored with the big platforms.” More.

Too Close For Comfort

Amazon was granted a US patent for Alexa technology to identify emotional or physical states, like if someone is bored, excited, tired or sick. Someone coughing and sniffling, for instance, may be inferred to have a cold and get an offer for one-hour cough drop delivery. “Providing these responses could help Amazon sell Alexa owners more stuff via voice shopping and even serve targeted advertisements,” reports CNET. Keep in mind, though, that Amazon routinely secures patents that hint at future ambitions but are nowhere near reality. (Giant delivery drone bee hives, anyone?) Alexa’s personalization and voice commerce adoption still has a long way to go. “Plus, especially when it comes to people's health, customers may find a new Alexa feature that notices emotional or physical changes invasive and creepy, even if meant to be helpful.” More.

Brands like Unilever, Procter & Gamble and Coca-Cola underwrote content production and audience growth during the heyday of television. History is now repeating itself with direct-to-consumer startup brands rushing into online, targetable media channels. The result is an emergent class of marketers that prefer to pull the media levers and “(see) the value in owning the data and having carte blanche access to it,” rather than dumping it into a “data lake at some large agency,” writes Darren Herman of Bain Capital, on Medium. “Agencies still exist and they haven’t gone away. … But IMHO, the centralization of all media execution within a media agency now and in the coming years is and will be on a decline.” More.

Snap will produce 12 new shows and formalize its original programming under the Snap Originals brand, the company announced on Wednesday. Snapchat’s audience growth has plateaued, but it’s been able to maintain steady viewership of its original scripted shows, which viewers watch on average three times per week, Digiday reports. By pushing into serialized scripted content and docu-series, which will be four to five minutes long and filmed vertically, Snap is hoping to drive more appointment viewing through its app. It’s also hoping to boost revenue by inserting a couple of unskippable, six-second ad units rounded out by sponsored content and product placement opportunities. More.